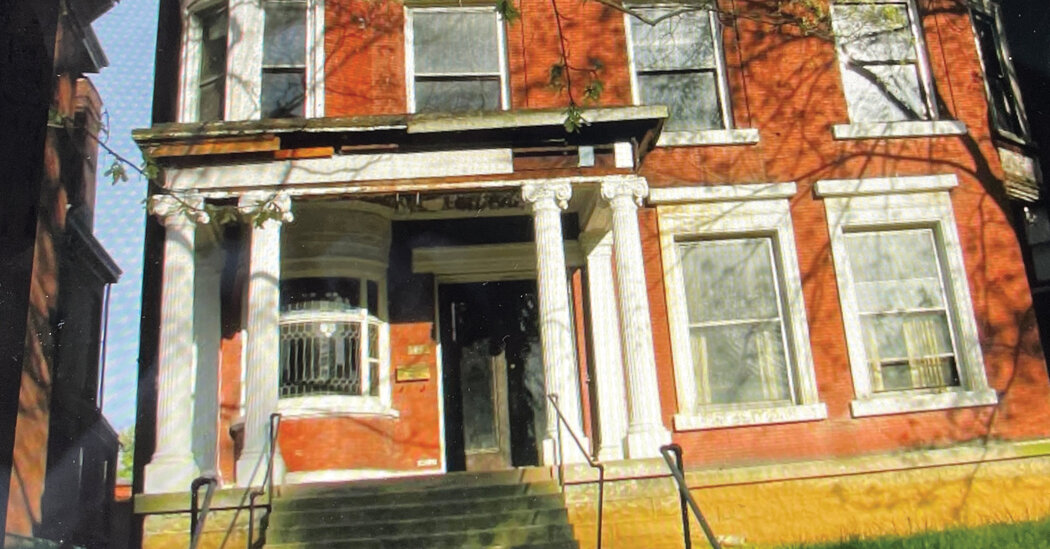 David Dominé, a multilingual and multilingual former expatriate who dreamed of holding diplomatic missions far away, never thought of rooting himself in Louisville, Ky. But a planned few years for law school turned into an impromptu few decades: “Glitter Ball City, Son. “He had a way of drawing people in,” he writes, using a less familiar nickname for his hometown.

Once, while searching for a home in Old Louisville, the city’s historic preserve, Dominé and her partner toured an old brick house, admiring the beautiful fireplace and walnut veneers, while also noticing the overall “weird vibe” of the space. They didn’t buy him, but the house made enough of an impression on Dominé that he knew her when, more than a year later, on the morning news, police announced that they had found a body. container buried in earth ground basement.

Details soon emerged; The deceased was a drag artist named Jamie Carroll, known to some as a ruthless drug dealer. Two gay men living in the house at the time – Joey Banis and Jeffrey Mundt – were arrested and charged with murder. The details were too good for Dominé to resist.

One of the many questions surrounding the case: Would Dominé, a true crime writer with a soft spot for the paranormal (his previous works include “Ghosts of Old Louisville” and “Voodoo Days at La Casa Fabulosa”), write about it?

He had reservations about “sitting at hearings” and “disturbing the neighborhood by revealing the soft belly that always comes up when writing about real-life individuals.” But after finally clearing his doubts, he decided to take the plunge. The result is “The Dark Room in the Glitter Ball City,” a story that is part true crime mystery and part portrait of Louisville.

The gradual unraveling of murder cases stands behind Dominé’s accounts of living and surveillance in Louisville, depriving the book of an expected narrative source. But when one of the established eccentrics catches his attention, the story comes alive: nearly every page of “The Dark Room” is brimming with Dominé’s blatant love for the local characters with whom she ate, drank, gossiped, and opened her mouth. Busy socialites and babbling transvestites; co-practitioner of S&M and witchcraft; The owners of a whimsical attraction that showcases mutilated dolls on the roadside: all as lovingly defined as the hardwood floors and elegant moldings of Old Louisville’s aging mansions. Meanwhile, Dominé’s passion for the city’s social and architectural history brings to life some of the book’s most memorable passages.

Although he loves the city, Dominé is not shy about documenting the prejudices and reflexive homophobia that emerges during the trials. In a remarkable scene, Dominé reproduces the responses of prospective jurors to voir gruesome questions about whether they can fairly admit a gay defendant. Jury Candidate No. 823394 said, “I am very disgusted with homosexuals.” Another juror, who claimed to be impartial at first, said later on, on a second thought, that she might struggle when really confronted with “gay details.” During the trial,” Dominé writes.

The intolerance showcased during the trial complicates a Louisville painting of Dominé, though in some ways a jolly pile of weirdness, it’s not immune to bigotry’s biggest hits. Dominé kindly corrects a detective’s use of the word “gypsy” (“I think they use the term ‘Rome’ today”), but blushes at the habit of another acquaintance wearing Nazi uniforms in town. The occasional sensitive take on Louisville’s ugly qualities is a reminder of the importance of critical distance: Dominé, one of Louisville’s biggest supporters, isn’t necessarily the best resource for an unbiased, warty, and all-around account of the city.

The book’s ever-changing series of personalities is far more likely to stay with readers than the harrowing details of Carroll’s murder. After all, any of them will be the most interesting person you’ll meet all week.

Maybe at next year’s Derby.