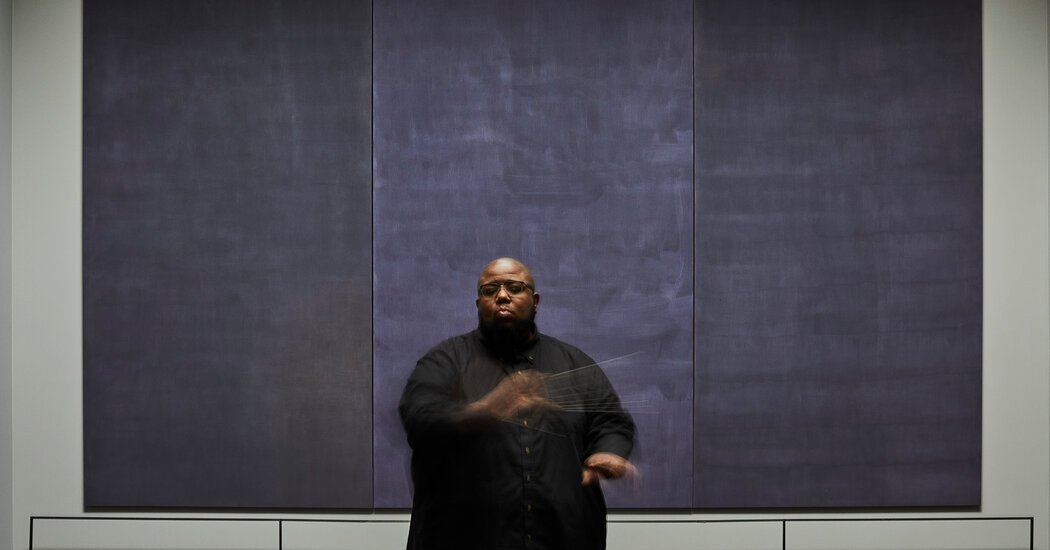 Before Tyshawn Sorey He wrote a note of his latest work to commemorate the 50th anniversary of Rothko Chapel in Houston and spent hours in its octagonal temple, which contains more than a dozen dark canvases.

Immersed in Mark Rothko’s seemingly black fields, Sorey realized that the paintings were changing gracefully over time and time itself was melting away. The colors changed to match the sun entering through the chapel’s skylight. When she went out and came back, her adjusting eyes made her feel as if the artifacts were coming to life, she.

Few people can give Rothko the time and space to perceive what Sorey saw. However, “Afterlife”, which is like a sonic distillation of what they’ve experienced, might give them an idea. Written for the chapel’s 50th anniversary – and postponed for a year due to the pandemic – it will be a new work premiere there on SaturdayIn front of a staged presentation at the Park Avenue Armory in New York this fall.

The piece is partly a tribute to one of Sorey’s heroes, composer Morton Feldman, who was written in 1971 for the building “Rothko Chapel”, a project by art philanthropists Dominique and John de Menil. Feldman’s note-taking work for percussion, celesta, viola, choir and soprano was an abstract analogue of Rothko’s canvases. Deceptively formless, it is music to be lived. But towards the end, the viola plays what Feldman calls the “half-Hebrew melody” he composed when he was young, a memory and memorial to his (and Rothko’s) legacy.

Sarah Rothenberg, artistic director of DaCamera, the presentation organization that premiered Sorey with the chapel, said Feldman was a “special piece”. “A remarkable synergy between space and music that has become a kind of ambassador.”

A new ambassador was sought when designing the 50th anniversary commission. Sorey came to mind, Rothenberg said, because of how it relates to the history of Black Americans, in line with the chapel’s civil rights-focused mission. And he knew his style was shaped by Feldman.

Sorey, 41, first became acquainted with Feldman’s music while in college, when he heard that his teacher, Anton Vishio, was practicing. “Piano.” “It was beautiful,” said Sorey, adding that the music, timbre, and patience “really spoke to me more than anything else I was listening to at the time.” Almost every composition I write is inspired in some way by Morton Feldman. It is difficult to recover from such an influence.”

Among other influences, including Roscoe Mitchell, Feldman taught Sorey the goal of reaching a place in music where time no longer exists and where a listener can truly be present in the moment. “Every voice has its own world at that point,” Sorey said. “You can talk about the technical parts, but the quality I want to take out of that is the availability.”

For “Monochromatic Light (Afterlife),” he chose nearly the same instrumentation as “Rothko Chapel”—somehow, director Peter Sellars, who will be staging the piece at the Armory, echoes the lineage in the music, “how your granddaughter has grandma’s eyes.” But instead of the half-Hebrew melody, Sorey quotes the spiritual “Sometimes I Feel Like a Motherless Child” in his broken tone. He added a piano (played by Rothenberg, double the celesta) and replaced the soprano soloist with a bass that he felt matched the tone of the paintings better.

When Sellars reviewed the score for the first time with Sorey, he remembered looking at the part and saying at roughly the same time who they wanted to say: bass-baritone Davóne Tines. Sorey contributed spiritual treatments to Tines’ “Mass” recital program. Tines after first hearing what would it be “Perle Noire: Meditations for Josephine” Sorey’s evening-length work for soprano Julia Bullock, inspired by the life of Josephine Baker.

“I realized that he was able to unlock the meaning in the text by recreating it in his own voice,” Tines said. Together, he and Sorey reviewed the clergy catalogue, because “Tyshawn is able to reveal the truer psychology of what these songs mean,” Tines said.

Feldman referred to the “Rothko Chapel” as a “secular service.” While Sorey emphasizes that Feldman is only one of the influences on “Afterlife”, the idea of ​​a secular service is what he aims for; that’s why he prefers to call his performances rituals. And it permeates this work from the first measure: it is a resolution of time in which, indefinitely, tubular bells resonate in near silence with two chord pitches struck at random as other performers enter the space.

“It’s a similar feeling to when I first entered the chapel,” Sorey said. “It’s almost that cathartic kind of feeling, the moment you walk in; as a religious experience. So with the realization of the resonating sound and you’re not sure what to make of it – it’s almost ceremonial, something spiritual. You remove any external barriers for that kind of clarity that I think Rothko has always sought in his art.”

When the choir later joins, its members sing without vibrato, with Sorey waving their breaths to create uninterrupted streams of suspended sound that are no different from the paintings that surround them.

“To me, sounds are like these panels,” he added. “Sounds are expressive, expressing a certain type of emotion, such as tragedy or grief. So like Rothko, my voices and the way I use those sounds are more about expressing this emotional experience than abstraction. And I see the listener surrounded by these ever-changing emotions.”

A few people – about 300 people at two performances – will experience the gala this weekend. However, there are plans to release an album of the work on the ECM label. 2015 version of “Rothko Chapel” It featured artists including Rothenberg, who returned for “Monochromatic Light (Afterlife)”.

Then, in late September, the piece will travel to the Armory, where the audience will be immersed in the panels. Julie Mehretuan artist whose abstractions have common preoccupations with Sorey and Rothko. On the surface, this cavernous space could not be more different from the intimate chapel. But Sellars said, “The beauty of Armory is, opportunity for something.”

He continued: “What Tyshawn has created is monumental space. Rothko and Feldman have created a memorial space where you can feel the presence of silence, grief, darkness, erased histories and yet erased lives that exist and move and speak within these dark spaces. Feldman and Rothko “They brought their history to this field. I think this group of artists will do the same.”

Details such as whether or not the choir will be hidden are still being worked out, but at least Sorey said it will “get more intense” than the presentation in Houston.

“How can we make this a more ritual or ceremonial event?” added. “How can we concentrate the spiritual, metaphysical substance from which the piece is taken? That’s what I want: to truly amplify this experience.”