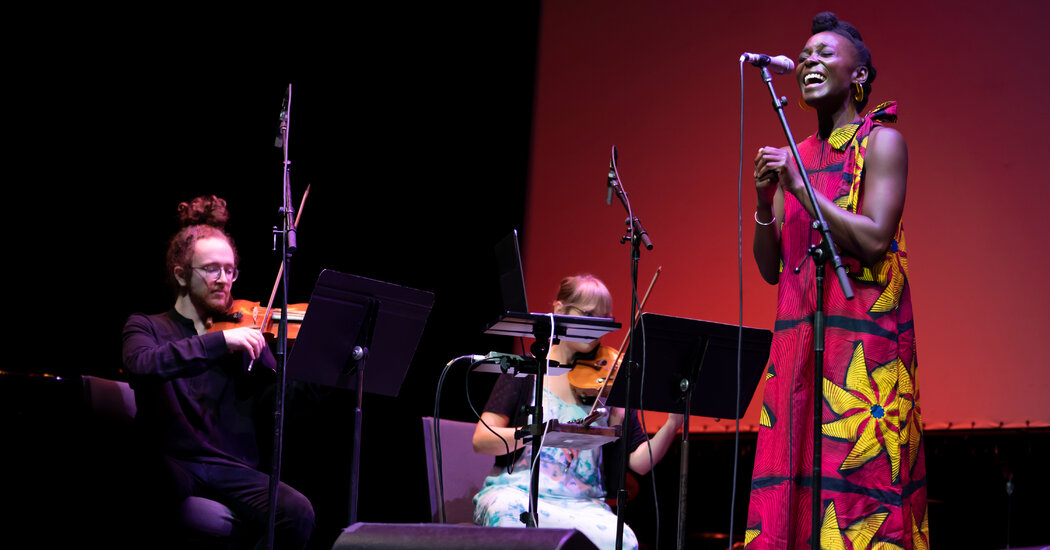 NORTH ADAMS, Mass. — Going back to live performances and finding an unhealthy classical music institution can be like putting on a pair of old jeans and exploring with a relaxed fit.

That’s what it felt like to attend the Bang on a Can’s LOUD Weekend festival held here Friday and Saturday at the Mass MoCA complex, returning to form for the new music collective after hosting live concerts for 15 months.

With over 20 hours of performance, you could see one familiar look after another – all hallmarks of the legendary, free Bang on a Can Marathons in New York City. But here, in a two-day, paid environment, there was more time for each musician to take on a different character. And while a few artists coped with the excitement of the first day, most looks came out with a vibrant, defiant polish—as if they’d never stood out from the audience.

This was especially true for the show where pianist Lisa Moore made its world premiere on Friday, featuring works by Philip Glass, Don Byron, Martin Bresnick. Frederic Rzewski, who died in June. The set was a confirmation of the interpretative insights he brought to his works. these composers on it records. And the Rzewski premiere – “Amoramaro”, subtitled “Love Has No Law” – was bittersweet: it was an alternately seductive and prickly reminder of all his music that could no longer be written.

Commissioned by her husband for Moore, “Amoramaro” is still something worth treasure (and certainly worth noting). The occasional lush chords—half-remembered and half-converted from the American Songbook—mix with stark, flint runs that make trapeze-swing connections between distant records. And he may have been inspired by his culmination, hit sets. Rzewski’s experience of playing Stockhausen’s “Klavierstücke”. Holding it all together for over 15 minutes was testament to both Rzewski’s distinctive and personal palette and Moore’s keen sense of it.

Elsewhere, the festival was delivered with bold names: This weekend audience members asked each other, “Which Kronos Quartet concert was better?” It’s very meaningful to ask. It was Friday night for me, a bleak yet intense set that started and ended with Jlin’s “Little Black Book.” “Storyteller” by Jacob Garchik. This performance is Terry Riley’s “This Assortment of Atoms—One Time Only!” including the premiere, it was more consistent than the performance that followed on Saturday, which was well played but more common. — an attractive but modest contribution to the composer’s An important work for Kronos.

As at the Bang on a Can Marathons in the past, contemporary and modernist trends from around the world were featured and unveiled at LOUD Weekend. These include French spectralism (in the music of Gérard Grisey); Minimalism (Riley, Glass and their descendants); and collective improvisation (from Banda de los Muertos, a jazz ensemble inspired by the music of Sinaloa in Mexico).

And there were solo acts throughout. NS violinist, improviser and composer Mazz Swift brought the Saturday night to the top with the presentation of the “Sankofa Project”. he described As “re-imaginations of so-called slave songs, freedom songs and my own versions of what I call modern-day protest songs.” Whether Swift uses fine electronic processing to amplify a few chest-voice notes or loops a stringed violin passage to create a hazy cloud that supports her spitfire solo lines, the range of effects has proven to be as powerful as it is versatile.

In addition to the starry headlines, there were also students from the Bang on a Can summer institute who were given moments of glare. A few seemed ready to form their own ensembles and perhaps return for future festivals. Saxophonist Julian Velasco, for example, excelled as part of a mixed professional and student ensemble. Julius Eastman’s “Feminine” As part of a duo playing Shelley Washington’s “BIG Talk” on Friday and Saturday.

Ken Thomson, Velasco’s veteran partner in Washington, was a nearly ubiquitous force for both days, including a member of the organization’s house band, the Bang on a Can All-Stars.

Thomson and his All-Star friends nailed their moniker in the strongest terms on Friday, with a striking take on “The Labor Union,” a Minimalism-influenced classic by Louis Andriessen. who died in july. And the band’s schedule on Saturday night – which doubled as the festival’s finale – was mixed, as the capstone played lively and energetically.

This concert featured a new arrangement of Terry Riley’s “Autodreamographical Tales” (soon to be released on the All-Stars record). Or an antique on top of a curiosity, because this version has its roots in an obscure piece Riley recorded in the 1990s.

Its text comes from a dream diary that Riley kept for a while. It has modest moments of humor and “Tales” inflates the musical ego in a winning way; We understand how often Riley’s dreams make other musicians compliment her work. But the work is also rambling, and it’s not always as clever as the subconscious might hope – as the dreams narrated tend to be.

Yet “Tales” offers rambling pleasures, especially when Riley imagines a vampire blues or rock number gleefully arranged here by his son, Gyan Riley. Guitarist Mark Stewart has taken over vocal duties as Riley has been in Japan since the start of the pandemic. (She made a brief appearance in the form of a lively, cheery video teaser.)

In the final hours of Saturday’s line-up, listeners can run from a short set. rising star Nathalie Joachim (singing in quotes and playing the flute his famous album “Fanm d’Ayiti”), to the Pandemic Solos concert commissioned by Bang on a Can for their virtual marathon during the pandemic.

At that moment, I could not bear to listen to the marathons broadcast live. I tried, but the troublesome sound – unavoidable with artists broadcasting from so many places – were recorded as micro-tragedies that distracted attention from the work. I told myself I would hear some of them later; And I did on Saturday.

The day opened a number of works, including All-Stars bassist Robert Black’s ghostly, eerie “Pending” by Maria Huld Markan Sigfusdottir. And after the set of Joachim, I heard the burning and distinctive trio of Aeryn Santillan, Rudresh Mahanthappa and Anna Clyne written for Thomson.

This is the hidden power of Bang on a Can. It attracts viewers with big names. But, as Riley did, if the legends are disappointed at a certain hour, there’s always the next set and the next generation to save the day.