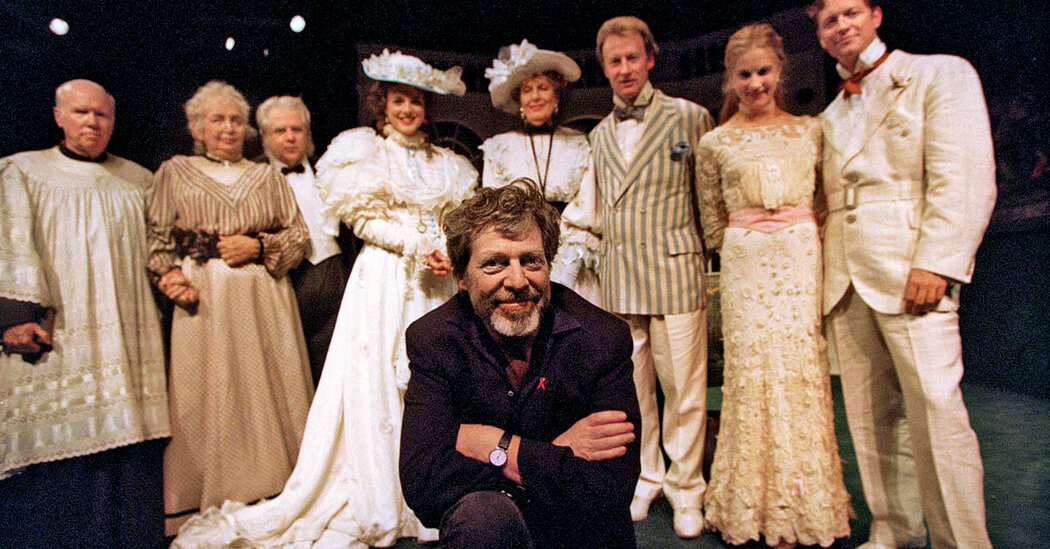 Tony Walton A production designer who for more than half a century brought broad visual imagination to creating different stage looks for Broadway shows and won him three Tony Awards died Wednesday at his Manhattan home. He was 87 years old.

Daughter, Emma Walton Hamilton, with her mother Julie AndrewsHe said the cause was paralysis complications.

In over 50 Broadway productionsMr. Walton collaborated on the design of the sets (and sometimes the costumes) with directors such as: Mike Nichols, Bob Fosse and Jerry Zaks, who won Tonys for “Pippin,” “The House of Blue Leaves,” and “Guys and Dolls.”

He also worked on the film for Mr. Fosse’s “All That Jazz” (1979), for which he shared the Oscar for art and set decoration; Years ago, Mr. Walton designed the interior sets and costumes for “Mary Poppins” (1964), starring Mrs Andrews, whom he later married.

Mr. Walton’s television credits include “Death of the Salesman” (1985), starring Dustin Hoffman, Kate Reid, and John Malkovichwon an Emmy for it.

Prior to the opening of his last Broadway show “A Tale of Two Cities” in 2008, Mr. Walton described the process of designing a production design.

“These days I try to read the script or listen to the music like it’s a radio show and I don’t allow myself to be suddenly disappointed.” told Playbill. “Then, after they’ve made with the director – and, if I’m lucky, the writer – and whatever contribution they want to make, I try to imagine what I’m seeing as if it were slowly being revealed by a pool of light.”

Donald Albrecht, curator of an exhibition of Mr. Walton’s theater and film works at the Museum of the Moving Image in 1989. In The New York Times in 1992: “She never puts a Walton style on top of the material. It comes from within.”

Mr. Walton has worked with Mr. Zaks on several Broadway shows, including “A Funny Thing Happened on the Way to the Forum” and “Guys and Dolls”, a remake of “Anything Goes.”

“I started directing because I love working with actors,” Mr. Zaks said in a phone call. “I didn’t appreciate what a set could do for a production. Tony challenged me to visualize the different possibilities that could be used to create a set.”

For the 1986 revival of John Guare’s “House of Blue Leaves” about a family in Sunnyside, Queens, Pope VI. the game.

“He referred to the people of Queens as Oz of Manhattan,” said Mr. Zaks, “and other than that he always found a set that kept Manhattan at a distance.”

In his review in The New York Times, Frank Rich describes the effect From the set of Mr. Walton, “A Stuart Davis-like collage in which the cityscape of the Shaughnessys’ rough home misery is besieged by oppressive brand signs.”

Four years later, Mr. Zaks added: “I said, ‘Tony, with two sofas and a Kandinsky, we can do ‘Six Degrees of Separation’. He said, ‘Trust this, believe that,’ and it made me a better director.”

In Mr. Guare’s play about a mysterious young Black swindler, the double-sided Kandinsky hangs over the two red sofas in the scene.

Anthony John Walton was born on October 24, 1934, in Walton-on-Thames, England. His father, Lancelot, was an orthopedic surgeon. His mother, Hilda (Drew) Walton, was a housewife.

He traced his love of theater when he was 5 or 6 years old. — and there were a few bubbles to cheer them up along the way — and they woke my sister and me up and taught us ‘The Lambeth Walk’.”

His interest in theater blossomed at Radley College, near Oxfordshire, where he acted, directed and performed puppet shows. After serving in the Royal Canadian Air Force, he studied art and design at the Slade School of Fine Arts in London. While there, he was a part-time actor and stagehand at Wimbledon. Theatre.

After graduating in 1955, he moved to Manhattan, where he found a job drawing cartoons for Playbill. The first major theatrical project in the United States was the Off Broadway revival of the Noël Coward musical “Conversation Piece” in 1957.

Four years later, he was hired for his first Broadway play, after moving to London, where he designed productions for variety shows. “Once There Was A Russian” Set in Crimea in the 18th century; closed on opening night.

His next show, his original production “Something Funny” He worked for over two years and used his idea to project various images of the sky on a curved screen throughout the stage.

Over the next 47 years, he alternated between musicals, comedies and dramas, as in the 1973 Broadway revival of Anton Chekhov’s “Uncle Vanya.” For one of her stars, Lillian Gish, According to Ms. Walton Hamilton, she had designed an eggplant-coloured dress, which she refused, saying that “Russian peasants only wore beautiful pastel colours”. “Of course, said Miss Gish,” she said, and she dyed it one shade darker with each subsequent cleaning.

In the 1990s, at the Irish Repertory Theater in Manhattan, the Old Globe Theater in San Diego, the Goodspeed Opera House in East Haddam, Conn., and the Bay Street Theater in Sag Harbor, New York, where her daughter helped. He also started directing. to create. At Bay Street, he was also the production designer for the 2003 revival of “The Boy Friend,” which was Mrs Andrews’ directorial debut.

“Tony was my favorite and oldest friend,” said Ms Andrews, who met Mr. Walton when he was 12 and he was 13. “He taught me to see the world with fresh eyes, and his talent was simply tremendous.”

In addition to his daughter, he is survived by his wife, Genevieve LeRoy-Walton; stepdaughter Bridget LeRoy; five grandchildren; sisters Jennifer Gosley and Carol Hall; and his brother Richard.

In 1989, Mr. Zaks remembered being indecisive about the type of hotel the bullshit was at. “Lend Me a Tenor.” Mr. Walton drew a Victorian style drawing, then another with a more attractive Art Deco design.

“The beauty of the Art Deco sketch blew me away,” he said, “and I immediately knew it would be funnier when things got messy on stage, when people started slamming doors in a beautiful Art Deco architecture.”