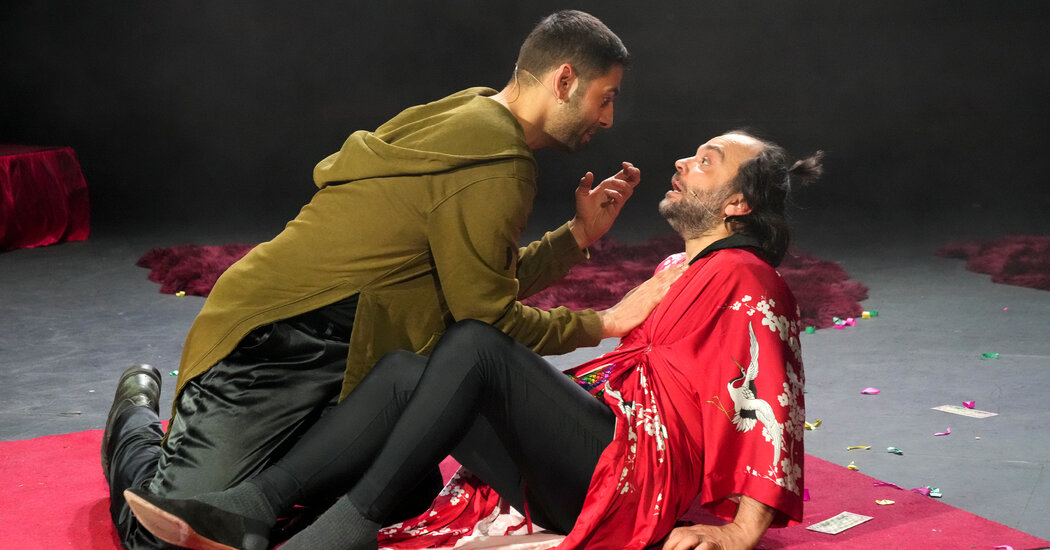 But in the performances of the members of the Great Jones Repertory Company of La MaMa, there is a kind of abstraction, in contrast to the immediacy of the work of the Balkan actors. George Drance’s Agamemnon exudes a full, well-received energy without any of the softened barbarism you might expect. Even with the human war bounty Cassandra, she is devoid of threat.

Undoubtedly, the charismatic, fully realized performances of Cvetkovic and Mihailovic upset the scale of the production. Kushtrim Hoxha, an Albanian actor, is oddly attractive as Pylades, Orestes’ choreographer friend from Berlin – a representative of the non-Balkan Western world and disdain for the region.

Clytemnestra (Onni Johnson) and Orestes (Eugene the Poogene) here, with blood on his hands, it is Mihailovic who brings a simmering sense of violence and physical danger into the room. As he exits the ramps at one end of the stage, enraged, stomping, the threat of brutality echoes with his every step. When Pylades asks him about his experiences in war, his answers are frustrating, but the slow smile on his face is even more frustrating.

It was left to the poet Aegisthus to oppose the war and its actions. “O my people,” he writes. “Beware of the warlords, my people.”

Not that he’s innocent, of course. Before Clytemnestra destroyed Agamemnon, her lover was bloodthirsty.

“I like to imagine his body being cut into pieces, his eyes staring out like a dead fish,” Aegisthus says with a cold-blooded hatred that makes him utterly terrifying. “But all that matters is that you’re done with him. He’ll be done and we’ll live happily ever after.”

That’s the eternal fantasy, isn’t it – one more act of violence will even the score and the revenge will end. Spoiler/not spoiler: Aegisthus is also killed.

“They sent me to hell by mistake,” says the ghost. “I have filed a complaint.”