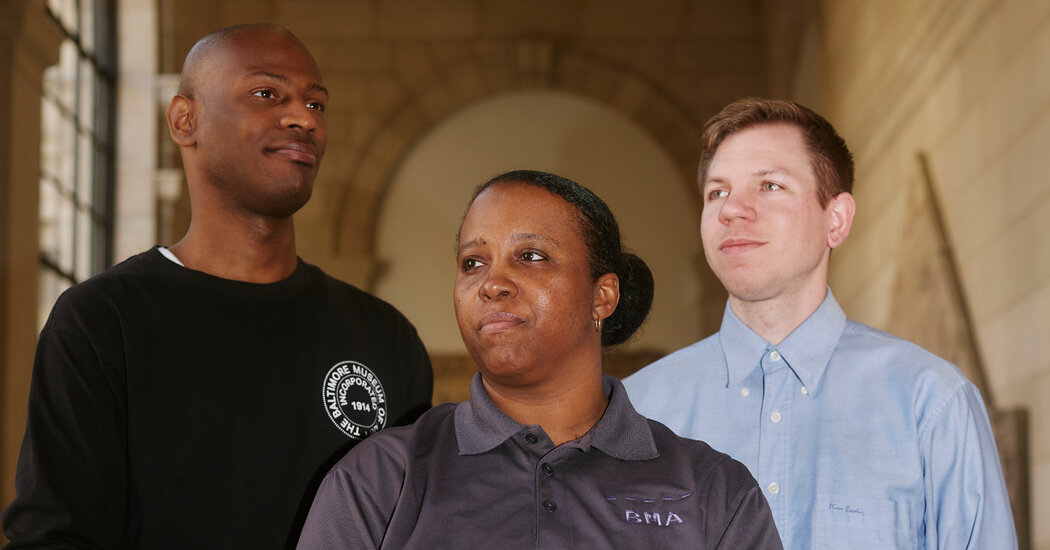 BALTIMORE — Museum guards have been the focus of the Covid, Black Lives Matter protests, and the unionization efforts and equality and security talks that have ravaged US museums. Final stab at MoMA. Yet they remained a largely anonymous group.

“When you’re a guard, you’re exposed like everything else, but invisible to the public,” the artist said. Fred WilsonWorking as a guard in the 1970s Neuberger Art Museum Purchasing has created pressure for institutions in NY to be more aware. A sculpture named “Protected Vision” in 1991 It shows four Black headless dummies wearing uniforms from different New York museums and posing on a platform describing this paradox and its social and racial dynamics.

Now, in what may be the first of its kind, the guards at the Baltimore Museum of Art step into the light as guest curators and individuals. It is part of the national reckoning of museums that strive for diversity and inclusion and seek original ways to bring a range of voices to interpreting art.

market opening, “Preserving the Art” Contains artifacts from the museum’s encyclopedic collections, selected for highly personal reasons by 17 members of the security team. They collaborated across departments at every stage of the exhibition, from writing the wall stickers to developing the brand identity and designing the installation.

“One of the reasons I wanted to be a part of the exhibit was to show people that museum guards do more than say, ‘Don’t touch it,'” said Kellen Johnson, 35, who has since worked in security at the BMA. He is a classical vocal performance specialist who graduated from Towson University in 2013 and this spring. “We are filmmakers, musicians, professors, writers, artists. We know a lot more about the artwork than people would believe.”

Trained to sing in German, Italian, Latin, English, Spanish and French, Johnson likes to take full advantage of the museum’s excellent acoustics as she wanders the galleries. Between choir work and working the night shift earlier this month, he previewed two selections of exhibitions he was familiar with from his tours: “Still Life with a Large Shell” by Max Beckmann (1939), portrait of the artist’s second wife, Mathilde, an aspiring musician, and “Normandy Landscape” by Hale Woodruff (1928) This reminds Johnson of African-American spirituals and French art songs.

“If this picture could sing, how would it sound?” Johnson posed. In response, Mozart’s “Dance un Bois Solitaire” about a walk in a lonely forest.

The idea to “Protect Art” came to Amy Elias, one of the museum’s board of trustees, in early 2020 after a conversation with Asma Naeem, the museum’s chief curator, who was interested in starting a mentoring program for guards. “They spend more time with art than anyone else in the museum,” Elias concluded.

He presented the concept to the museum director, Christopher Bedford. With the support of the board of directors during his six-year tenure, Bedford reoriented the museum’s mission around equality issues; this included obtaining the work of underrepresented artists through the practice of taking out of reach, including through the sale of controversial artwork by big names. (Bedford is moving to the San Francisco Museum of Modern Art in June as its new director.)

“Preserving the Arts” is “another embodiment of our commitment to creating a much more accessible institution,” Naeem said. “This is a reassessment of who has the knowledge, giving guards the tools and opportunities to continue developing skills. It’s obviously about who’s sitting at the table.”

Naeem invites senior curator and art historian Lowery Stokes Simsis a former director of the Studio Museum in Harlem to mentor the guards in their new role as curators. “I was fascinated by why the guards chose different pieces that relate to their interests, their political stance, their sharp visual response to art, or just the stories,” Sims said.

Learn More About The Metropolitan Museum of Art

Sims couldn’t have imagined a similar exhibition curated by the guards during his 50 years on the museum grounds. However, it does reflect ongoing efforts at other museums to make art more relevant to people’s lives. The New-York Historical Society, for example, integrated personal impressions of artworks. from non-specialists in wall stickers for a show last fall.

In Baltimore, when guards receive some feedback from different departments in unconventional ways they want their objects to be kept or labeled, Sims graciously advocate preserving the private quality of their individual responses.

“What we saw in times of Covid has received a lot of attention and has even demanded that organizations move away from the usual way of doing business, move beyond traditional expertise and aesthetic approaches, and accept other perspectives,” he said.

For Rob Kempton, 32, a guard and published poet since 2016, Sims’ feedback has been invaluable in shaping “such a diverse and ever-changing spectacle.” It reinforced the idea that we didn’t need to get so hung up on themes, because the theme was the guards themselves, which I thought was a good idea.”

“I can’t talk about Frank O’HaraPoetry without talking about Hartigan and some Abstract Expressionist painters from the New York School,” said Kempton. Johns Hopkins Museum Studies She completed her master’s program in 2020 and was waiting for an opportunity to potentially advance her career at the museum.

Traci Archable-Frederick, 50, who worked in airport screening for the Department of Homeland Security before joining the BMA in 2006, was initially hesitant to join, but signed on because of her interest in the installation department. “I’ve seen so many different shows here in 16 years and they make everything magical,” he said. his choice “Resist #2” by Mickalene Thomas (2021), a mixed-media canvas collaged with contemporary and historical images of civil rights protests, he said, “deals with all the wrongs happening in the world.” “When I saw it, I said, ‘That’s all I wanted to say.

In the installation design, the work is directly “Black on Reds” by Mark Rothko [Black on Red]” (1957) With blocks of fused color chosen by Archable-Frederick’s colleague Chris Koo. “Being next to mine, red for me represents bloodshed, and black can represent Black people,” Archable-Frederick said. “It’s just my feeling.”

Elise Tensley, 37, worked as a bodyguard from 2017 until February, when she left for the position of assistant general manager at a swimming school. She always paints in her spare time. “My canvases sit in the corner, they are never seen,” Tensley said, wanting to pick something from the museum’s collection that rots in storage. She asked for a list of works that hadn’t been exhibited in at least 20 years, randomly choosing three numbers, and she was delighted to discover it. Jane FrankThe large, isolated 1958 landscape of ‘Winter’s End’ has only been shown twice before, in 1958 and 1983.

The curating experience “definitely boosted my confidence and made me understand what I had to offer,” Tensley said. It also encouraged museum-wide morale, he added. “We’ve formed friendships with people we’ve worked with for years and whose names we don’t even know,” he said. “I think it has helped some top leaders see us as more people.”

If the majority of staff chose to unionize (by an as yet unscheduled secret ballot), the museum management promised to work with union representatives.

The BMA has already made some progress on pay equality. The security team’s starting hourly wage has been increased three times since 2020, most recently from $15 to $16 in January 2022. (Maryland minimum wage is $12.50 per hour; at New York’s Metropolitan Museum of Art, where the guards are unionized), starting hourly wage increased to $16.50 in December.) 17 curator-protectors, in addition to their work on the show, have increased participation levels. from $750 to $1100 – depending on

Trustees Elias is confident that initiatives like “Guarding the Art” will continue no matter who is appointed as the next director of the BMA. “We didn’t spend all these years relocating our museum to where we are now in order to make a sudden comeback,” he said. “Thereupon I will die by the sword.”

An artist turned guard, Fred Wilson is now also a member of the board of trustees of the Whitney Museum of Art. He fears that if these efforts continue at the Baltimore Museum of Art and other institutions, some critics will lament the loss of scholarship.

“I’m worried that if this ‘experiment’ is repeated, it will be mistakenly interpreted as the stupefying of museum exhibits,” Wilson said. By interacting with professionals and ordinary people from other communities, he says, “museum curators can look beyond their professional silos and learn how to reach people who don’t have the same background.”