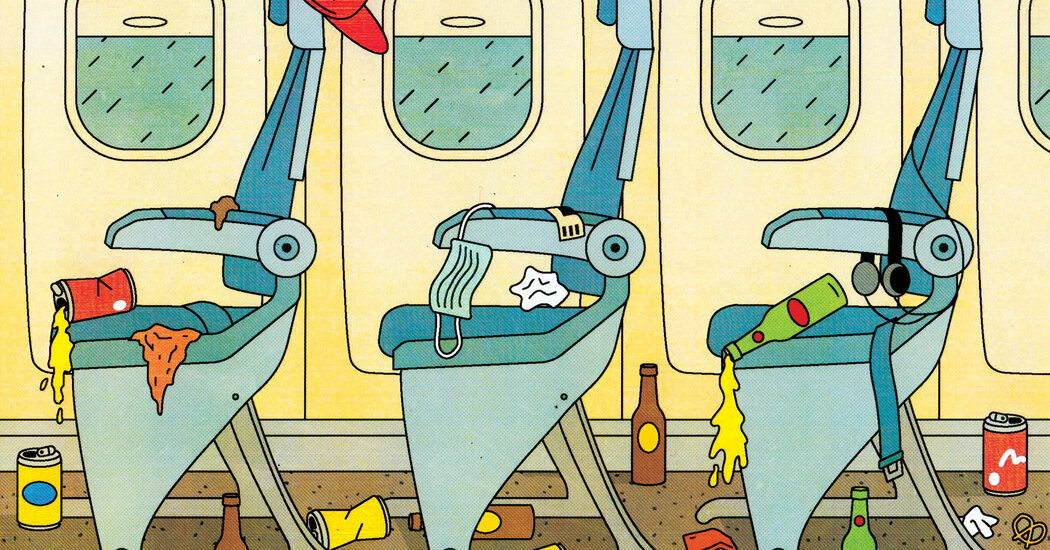 But mask challengers pose the most problems and the greatest risk to flight crews. An attendant with 25 years of airline experience told his teenage daughter about a passenger who repeatedly refused to wear a mask. When he got off the plane, after the flight attendant said “Good night”, the woman looked him in the eyes and threw a crumpled mask on his face. Last month, on a Delta flight from Dublin to New York City, a 29-year-old man repeatedly refused to wear a mask, pulled down his pants and unbuttoned, threw a box at a passenger, and put on his own hat. According to the FBI, the pilot decapitated the pilot as he passed through the cabin. Then the man made a fist and said to the pilot, “Don’t touch me.” A few months ago, after a flight attendant in the Southwest had asked a woman to fasten her seat belt, set up the tray table, and put on her mask over her nose, the woman stood up and punched the attendant repeatedly, drawing blood and breaking three of her teeth.

threats Roger, who has been flying for seven years, is now big enough to avoid working as chief officer: The risk and responsibility are not worth it. Wilson, another officer who asked me to use his middle name, said he wouldn’t be signing up for single-task jobs on smaller planes, like the 50-seat plane he worked on last year when he was a passenger, about 6 years old. foot-3 and refused to wear a 200-pound mask. As Wilson approached him, the man stood up and stretched out his arms and hands, essentially saying to back off. Wilson hovered 30,000 feet with only the pilots behind the bulletproof doors to support him. He reported the incident to the pilot, but when everyone got off the ship, the passenger drove away. “I get all these emails from the airline saying we support you and then I just felt lonely and deflated,” she said. “I’m stuck in a tin can with this guy. It’s not like I can run. I knew you could pull snot out of me.”

Roger said he had made more than 30 complaints about unruly passengers and never received a response from the airline. The same goes for another flight attendant who told me she had 100 notices. In the Association’s survey of respondents last year, 71 percent said they did not receive any follow-up from airlines after submitting their incident reports, and the majority saw no effort to address passenger behavior. The Flight Attendants Association-CWA called on airlines to improve communication with flight attendants. “Airlines do a good job of forwarding complaints to the FAA for investigations,” union spokesperson Taylor Garland said. “But there is no feedback loop with flight attendants.”

When I reached out to several airlines regarding the issue, they either didn’t address it directly or said they’ve reviewed the reports and spoken to their crew member or flight leader. Some flight attendants have told me that these days they either report occasionally or have stopped doing it altogether. Not only are they tired, they often have to report outside of working hours and are not convinced that it makes a difference.

Flight attendants feel isolated in other ways, too. “I used to get off a plane in DC, change my uniform, call an Uber, and drive around the National Mall and the Smithsonian,” Roger said. “Now I go to the hotel room, order food, turn on the TV. I haven’t had dinner with the team in a long time.” As he said, it has become a “slam clicker”. It’s the crew members who go to the hotel after the flight day is over, close the door behind them, click the lock, and only get out when the workday starts again. They used to be in the minority, but now the flight crews are full of them, either because of Covid fears or simply out of exhaustion. And in some cases, they have no other choice. In Tokyo and Seoul, the main destinations for senior staff, flight crews are now unable to leave their hotel rooms at all, except to and from the airport, due to national pandemic rules.

In January, I spoke to a staff member who was sick from burning out after more than a week of 4am alarms and 14-hour days. A few months ago, she was stranded in Chicago overnight after multiple schedule changes due to delays and last-minute staff shortages. He was stranded in an airport lounge until 3:30 a.m. when the airline found an empty hotel room for him. (She had to wake up at 6am for her flight home.)

“How much more do they expect us to get?” Flight attendant Nas Lewis said. “We’re on the edge of our minds.” Last year, when a late-arriving passenger boarded an overbooked flight, Lewis, who had flown the plane for seven years, looked for a possible seat for him. When Lewis found nothing, the passenger shouted at him and pushed him. Lewis did not report the incident. “The day was long enough,” he said.