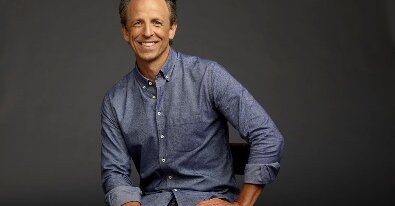 A LITTLE WEIGHT Late at night, a talk show host wrote a picture book, and the book hit the bestseller list – exactly at #3. This is not groundbreaking news; in fact, it has the scent of a tired punchline, the kind that could drive a studio audience crazy. Can you blame them? Name a funny guy who didn’t use his big wheel to take a spin around the kid’s rack and I’ll show you… Conan O’Brien. by Jimmy Kimmel”Serious Goose”; by John Oliver”A Day in the Life of Marlon Bundo”; by Trevor Noah”Crime Is Born” young reader edition; Stephen Colbert’s “Whose Boat Is This?”; and Jimmy Fallon have “Your Baby’s First Word Will Be Daddy” and “Everything Is Mom”, among other titles that adults might be embarrassed to ask the library for.

Last week, Seth Meyers I got involved in the game with “I’m not afraid, you’re afraid”, which tells about a cowardly bear, a brave rabbit and what they learned from each other. The bear sleeps with a bell attached to its door, so it can tell if an intruder has crossed its threshold (“Because even an easily frightened bear is a very heavy sleeper”). The rabbit sleeps with its door wide open and brushes its teeth “hanging from a tree branch by its ears”. (The feats of valor are beautifully illustrated by Rob Sayegh Jr., a former toy designer with expressive eyes.) Not entirely surprising, Rabbit persuades Bear to embark on an adventure. Fear begins, plus a mild and pleasant danger – and of course teamwork. The moral is simple, with its timely echoes of “Free to Be You and Me”: It’s okay to be afraid. The trick is to do this with a friend so you can take turns being each other’s backbone.

Meyers isn’t the only celebrity in the business of mobilizing young readers: Ciara and Russell Wilson’s “Why Not You? Life before face masks, nose swabs, and barrels of hand sanitizer. On the cover, a pair of caped crusaders are planting a flag on a planet, illustrated by Jessica Gibson; “The sky’s the limit!” she says. With the help of senior children’s writer JaNay Brown-Wood, the singer and Broncos quarterback are encouraging the kids to follow their dreams, whether they’re hoping to become “athlete, writer, singer, or crew captain.” The authors write: “Take a break, take a breath, a moment. Use brightness as your cue. And then consider the question: Why not you?”