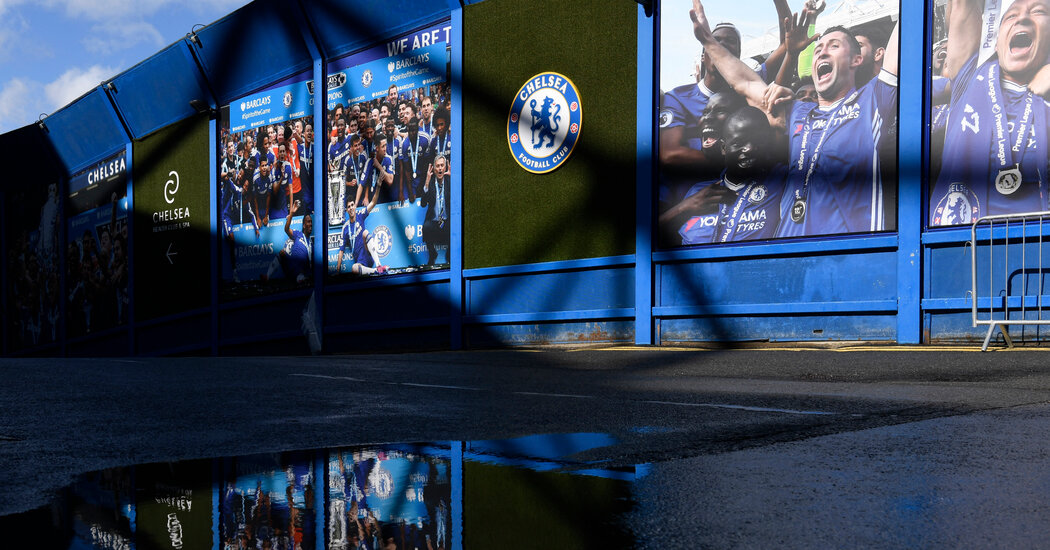 English football’s biggest soap opera – the battle for possession of Chelsea FC – seems to be entering the endgame.

New York merchant bank Raine Group, tasked with selling the Premier League football club on behalf of Russian oligarch Roman Abramovich, whose assets have been frozen by the British government, is set to identify its preferred bidder as soon as this week. It will choose one of three groups, each backed by American investors with a multibillion-dollar bid.

As Chelsea’s board, Abramovich and Raine pick the winner, they will be close to ending one of the weirdest and richest takeovers in modern sports history: a beauty pageant that brings together European football and American money; Chelsea legends and foreign posers; all a part galaxy of individuals and groups With designs on a team that over the course of Abramovich’s nearly two decades reign billions have grown into a sports giant.

When a deal is finally closed, the sale should provide the highest amount ever paid for a sports team, with estimates suggesting a price tag of around $3 billion. Abramovic is not currently allowed to receive any of the proceeds.

A group led by billionaire investor and partial owner of the Los Angeles Dodgers, Todd Boehly, one of the forerunners of the race, is well-positioned to emerge victorious. But Boehly and his partners are being challenged by an expanding consortium funded by Josh Harris and David Blitzer, members of the ownership group that controls the NBA’s Philadelphia 76ers, which this week added Formula 1 driver Lewis Hamilton and tennis star Serena Williams. to their ranks.

Representatives of all three consortia and a group of bankers from Raine led by one of the company’s founders, Joe Ravitch, were summoned to London this week, where each group will take one final step.

The surviving bidders were now on a path riddled with unsuccessful suitors, some to be taken seriously and others simply not. For example, a proposal by the Ricketts family, who own the Chicago Cubs, had deep pockets, but was torpedoed after anti-Muslim emails from family patriarch Joe Ricketts resurfaced—first reported in 2019.

MMA champion Conor McGregor bid £1.5bn (about $1.8bn) for Chelsea on Twitter, then deleted the post and possibly the offer. The mysterious Turkish businessman, who claimed to have talked to Abramovic’s lawyers about a price and bragged that “we’ll be flying the Turkish flag in London soon”, later missed the deadline for bidding. He claimed that his lawyers sent your offer to the wrong email address.

No immediate decision can be made for Chelsea players, staff and fans. The club has been operating under extremely unusual financial constraints since the sanctions against Abramovich, an ally of Russian President Vladimir V. Putin, were announced. A special government license allowing the team to operate left as many as 10,000 unsold tickets for the club’s home games, forcing the team to limit their travel budgets and close the team shop.

Uncertainty about the future also affected the team on the field. Chelsea expect to lose two key defenders, Antonio Rüdiger and Andreas Christensen, when their contracts expire at the end of the season. Until Abramovich is replaced by a new owner, no negotiations with possible replacements can be made.

After beating West Ham on Sunday, Chelsea manager Thomas Tuchel said it would be “ideal” for the situation to be resolved as soon as possible. “But you can’t pull the grass so it grows faster.”

However, the unique nature of the sale means that whichever group is granted preferred bidder status will only have overcome the initial hurdle. The British government must bless the sale for the sale to happen and will insist on strict rules to ensure that none of the proceeds go to Abramovich. Said he had any money to pay will be donated to the new charity “For all victims of the war in Ukraine,” but the charity’s plans remain unclear.

Potential new owners must then be reviewed and approved by the Premier League. This could lead to a formidable complication for Harris and Blitzer: They currently own Chelsea’s London rival Crystal Palace and will therefore have to divest their stake before they can take control of another Premier League team.

Meanwhile, Pagliuca has an investment in Italian Atalanta, which has been alongside Chelsea in the Champions League in recent years.

As deadlines for final bids were extended once, the process received numerous leaks in the news media, leading some bidders to privately express their disappointment and make allegations of unequal treatment. Raine did not comment on the process beyond An interview with the Financial Times Ravitch made a surprising and unsupported claim about Chelsea’s worth.

“My estimation is that Chelsea and all Premier League clubs will likely be worth more than $10 billion in five years,” he said, which was seen as a bid to push the selling price even higher. “I think whoever bought Chelsea at the prices we talked about today is buying it to steal.”

Chelsea’s record of success under Abramovich – five Premier League titles and two Champions League titles – did not come cheap; His spending in pursuit of these honors cost him about $2 billion of his personal wealth.

It’s unclear how the new owners will be able to sustain this record of success without deepening losses of more than $1 million a week during Abramovich’s administration. Under the terms of the sale, any new owner will have to commit to redeveloping Stamford Bridge, the team’s home stadium. Abramovich once promised to fund this project for up to $1.3 billion and scrapped the plan in 2018 due to a visa dispute that kept him away from the UK.

The team will also need to rebuild relationships with some of their key partners. Three, a telecom company, suspended its sponsorship with Chelsea after the announcement of the ban against Abramovic, and asked that its logo be removed from the team’s jerseys, fearing it could be drawn into a sanctions dispute. A few weeks later—to the growing disappointment of the three executives—the logo remained, the club reluctant to use stickers for the sticker or to order new shirts without it.

But the sensitivity of the process also underlined how costly even a single misstep can be.

Former player Paul Canoville, Chelsea’s first black player, was revealed this week. in its statement He said he met more than one group during the bidding process, but one after another he found what he wanted. He called the ownership efforts of Hamilton and Williams, who claimed to support other teams, “disrespectful” to Chelsea; the Ricketts offer, which has since been withdrawn, owed his plans to support the Chelsea foundation; and admitted that a group’s plan to introduce some form of cryptocurrency technology to fans “had crossed my mind.”