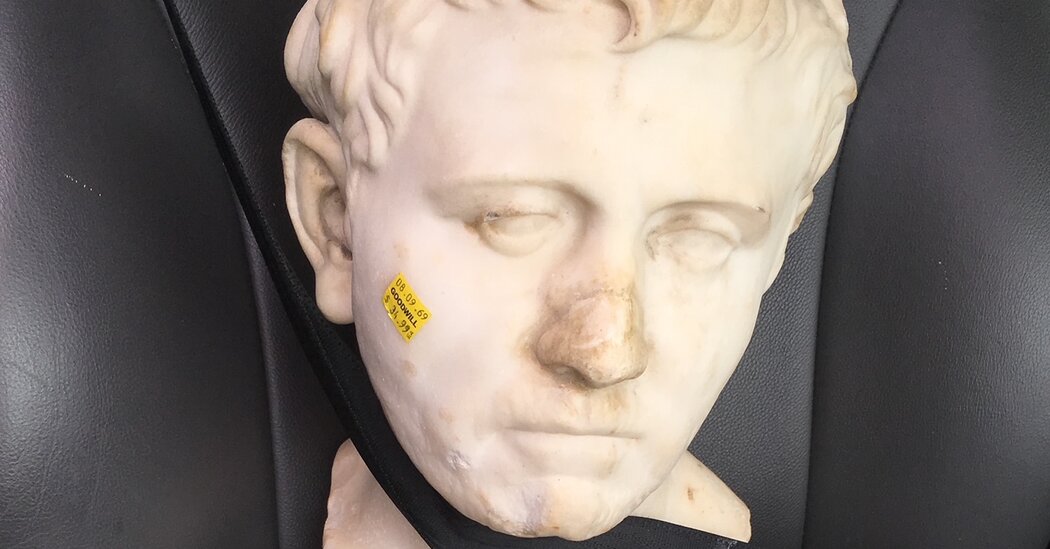 Laura Young found a bust for sale while browsing a Goodwill store in Austin, Texas, in 2018. It was on the floor, under a table, with a yellow price tag affixed to his cheek: $34.99. He bought it.

Apparently, another heavy stone suitable for plunging into the garden was not an antique. 19th century II. It was a true Roman bust of the late 1st century BC or early 1st century AD that was part of the Bavarian king’s art collection until it was sacked during World War II.

How he got to Texas remains a mystery. The most likely route, however, is that it was taken by an American soldier after the Bavarian king’s villa in Germany was bombed by Allied forces.

It was exhibited at the fair this week. San Antonio Museum of ArtNext to the sign acknowledging her role in Ms. Young’s 2,000-year impossible journey from ancient Rome to the Goodwill Boutique on Far West Boulevard.

Next year, he will be extradited to the Bavarian government under a deal that ends his own complicated relationship with Ms. Young, the artifact he has kept on a credit card in his living room for the past three and a half years.

He named him “Dennis Reynolds” after a character in the comedy series “It’s Always Sunny in Philadelphia”. Like that smug and narcissistic cad, Ms. Young said the 52-pound marble bust was “a very difficult, cold, distant, callous man who caused some problems for me.”

When she saw the bust for the first time, as reported by Ms. Young, an antiques and antiques dealer. KUT in Austin and Art NewspaperHe probably knew it was valuable.

“I found it outside in the light,” he said. “There were chips on top. Definitely has been repaired. He looks old. I went to museums. I’ve seen Roman portrait heads before.”

She did a Google image search for “Bust of Rome” and said, “They look a lot like my man.”

After taking the bust home, with a seat belt fastened in the front seat of his car, he contacted two auction houses, Bonhams and Sotheby’s, and both confirmed their hunch was correct: The bust was from ancient Rome.

Ms. Young was on vacation celebrating her 40th birthday when she got the email from Bonhams. She wanted to go home as soon as possible.

“He was alone in my house,” she said.

But subsequent investigation, confirmed by the Bavarian government, soon confirmed that Ms. Young would not be able to sell the piece and fulfill anyone’s fantasy haunting Goodwill shops and yard sales for priceless treasures.

According to Ms. Young, at some point before 1833, the bust was purchased by King Ludwig I of Bavaria and displayed in the courtyard of the Pompejanum. attorney, Leila A. Amineddoleh.

Ms Amineddoleh said that Pompejanum was badly damaged by Allied bombings in 1944 and 1945, and some of its objects survived, but others disappeared.

The looting of art by the Nazis received widespread attention. But as the raid ended in Texas, Ms. Amineddoleh said it was likely that an American service member might have stolen it or traded it in after the war.

Ms. Amineddoleh said this meant that Ms. Young was not the true owner, as Germany never sold the piece or relinquished its title. Ms. Young said Goodwill was also unable to answer about the origin of the bust.

“I was like, ‘OK, I can’t keep it and sell it,'” Ms. Young said. “It was bittersweet to say the least. But I only have control over what I can control, and theft of art, looting during war is a war crime. I can’t be a party to that.”

So Ms. Young made a deal to have the bust returned to Bavaria. In return, he will receive only a “small finder’s fee”, which Ms. Amineddoleh refuses to divulge.

“We are delighted that a piece of Bavarian history we thought was lost has resurfaced and can soon be returned to its rightful place,” said Bernd Schreiber, Head of the Bavarian State-owned Palaces, Gardens and Lakes Administration. In a statement released by the San Antonio Museum of Art.

The bust is believed to depict either a son of Pompey the Great who was defeated in battle by Julius Caesar, or a Roman commander, Nero Claudius Drusus Germanicus, whose forces once occupied German territory.

The San Antonio Museum of Art will display the important bust of Ms. Young until 2023.

He delivered the bust to the museum last month, leaving only a 3D-printed model of the piece he had kept in his living room.