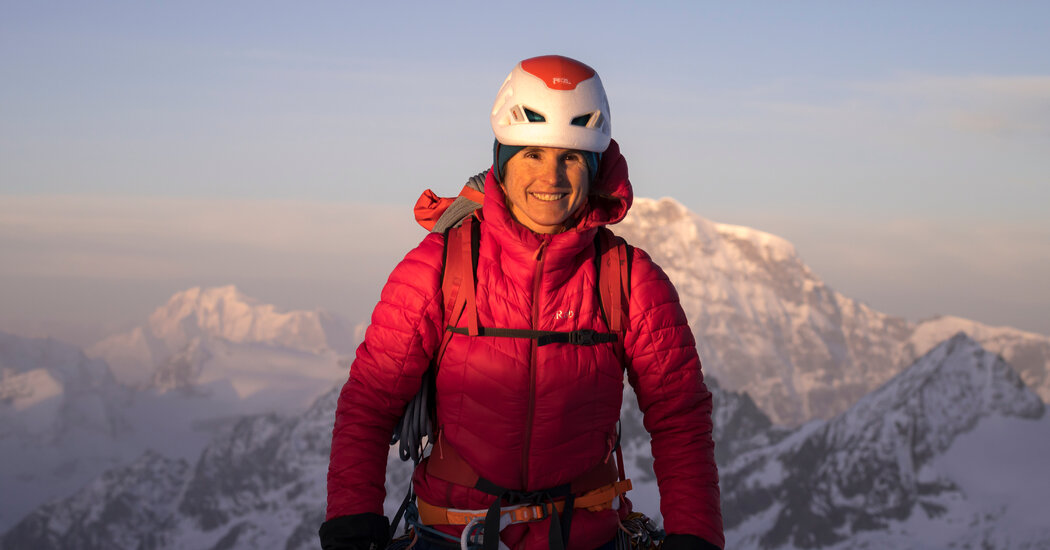 So how did you and Miss Gerardi team up?

It was February or March 2019 and we both did the 1000m vertical ski race. Hillary won and I came in second. We were waiting for the awards ceremony after the race and my partner Ben heard him talk about how he wanted to set a record on the Chamonix-Zermatt route. I knew I had the idea, but I was doubting my abilities and he said to me, “This is exactly the person you need to make a great team.” Hillary is about 10 years younger than me and I think that age difference means she doesn’t doubt her abilities like I do. Now I see women half my age who truly believe that women can make a mark and break their own records. There’s also a cultural difference – Americans have a very positive character and always say, “This is great! Well done!” We French are more like: “Okay, you could have done that better.” Hillary is a trail runner so she has great stamina. She’s also versatile in the mountains, very positive and very determined. Once I get involved, I’m determined too, but I hesitate to start. So I don’t know if I would have broken this record if I hadn’t met her.

You set the women’s record on the route in April 2021. How was the day?

We left the church in Chamonix at 2pm and arrived at the church in Zermatt at 4:21pm the next day, Easter Sunday. There wasn’t a huge crowd waiting, just a few family and friends. Snow conditions had worsened a bit compared to the previous week, so we were a bit skeptical that we would make it, so we hadn’t warned too many people. When we arrived in Zermatt, these two exhausted women, whose eyes were weeping and thrown into the arms of the few waiting for them, really didn’t care.

It was a kind of volcano of emotions. I was so tired and relieved that I had finished it. I was also very touched because I realized what I did: I had paid tribute to my husband. I did as he did. I was able to connect Chamonix to Zermatt on my skis and without assistance. So Laurent had a personal pride and also strong thoughts. Immediately after his death, I had the impression that he was everywhere with me, watching over me. Thanks to him, I do this sport.

Now you live in Chamonix but you didn’t grow up in the Alps. What drew you to that part of France?

I lived around Paris until I was 17, but as a kid I always wanted to live in the mountains. I had a cousin who got married in Chamonix when I was 10, and while we were there, my father and I took the elevator up to Aiguille du Midi and was surprised and thought, “I would love to live here. ” Later when I was a medical student in Bordeaux, I traveled a lot to the Pyrenees and then interned at Chamonix in 2001 and 2002 when I met Laurent. I was then able to do some mountain diplomas that allowed me to accompany the mountaineers of the military high mountain group. Living in the mountains has always been something inside me, and the training I’ve had has kept me coming and staying here.

You have just finished active service in the army. Will you still work as a doctor, or will you focus more on the mountains?

I will try to do both – I will continue to work as a doctor, do shifts in the emergency room, and as a reserve officer in the army, also running projects in the mountains. It is important for me to have these two business lines that challenge me in different ways. Being in the mountains requires a lot of intellectual ability – calculating risk, preparing your body, that’s all. But of course, being a doctor is also very intellectual. You really need to think about a diagnosis, do your research. It’s also tiring in its own way. But for me, both of these events are really important.

Have you heard of another woman trying to beat your record on the Haute Route?

I’ve never heard anyone say they’re interested, but we’d be very happy if other women came to us. Because it’s not just about keeping the recording to ourselves for as long as possible. It’s about inspiring others and helping them achieve it – that’s what I didn’t have.