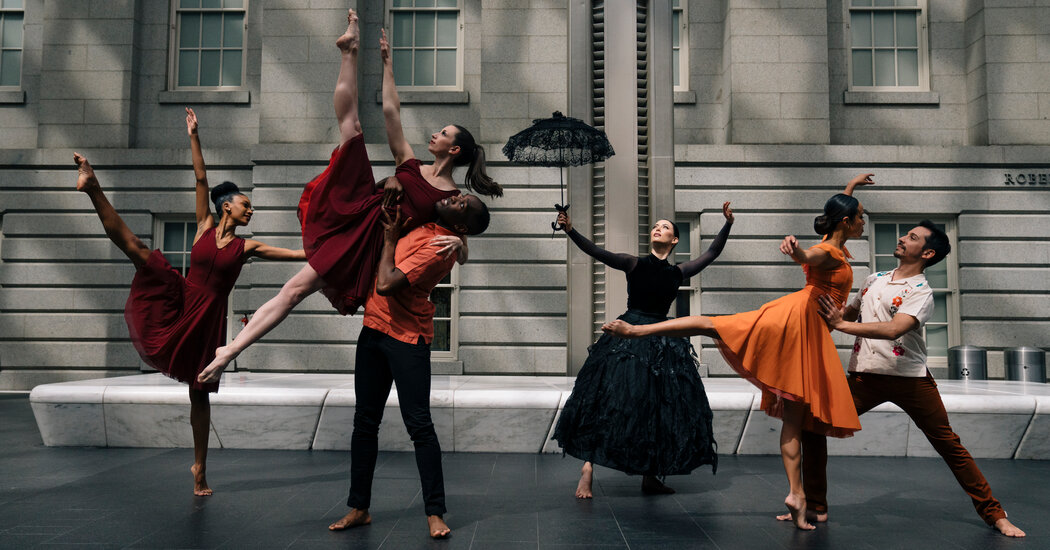 This article is part of our latest article Special section on museumsfocusing on new artists, new audiences, and new ways of thinking about exhibitions.

WASHINGTON — For centuries portraits and busts have been devoted to capturing images of the elite, leaving a distorted historical record largely confined to the “rich, pale and male”, says Kim Sajet, director of the National Portrait Gallery.

The museum, like many around the country, is working to address these shortcomings. But he doesn’t just try to diversify the faces in the portraits and sculptures lined up in his galleries. To enhance its collection, the museum turns to performance and organizes a series of events aimed at reviving issues as diverse as immigration, racial identity and Black female labor. The museum has also expanded the portrait approach by relaxing some of the triennial’s eligibility rules. Outwin Boochever Portrait Contest The 42 finalists (known as Outwin) will showcase their work from April 30.

The events are all part of the museum’s focus on aspects of the American story that are largely missing from its galleries.

“Many people were visibly missing” at the museum, which is part of the Smithsonian Institution, Miss Sajet In a recent interview, she said she was sitting under an upright portrait of Hillary Rodham Clinton, seemingly looking into the future, sitting under a profile from 2006. Cassatt-like Two years later, a portrait of then-first lady Laura Bush reading a book. (Miss Sajet had spent the first part of the morning giving actor and producer Reese Witherspoon a private tour of the museum’s presidential gallery.)

“The question is, how do you show the existence of absence?” Miss Sajet asked. “How do we really point out that a lot of people, voices, and ideas are missing?”

“So,” he continued, “how do you really get people to stand out in a way that gets them really emotional, thinking, and investing in it?”

The National Portrait Gallery isn’t alone in raising these questions. Leaders of many art and history organizations are exploring strategies to correct historical and cultural distortions by focusing on underrepresented populations and the issue, and by adopting new parameters for works that are displayed, collected and programmed.

“This is where performance comes in,” Ms. Sajet said of the National Portrait Gallery.

on May 17, Veal Tai Soon Burgess, the first choreographer in residence at a Smithsonian museum, will premiere a performance that specifically addresses immigration along the Mexican border. Then, as part of the museum’s performance series “Identify” on June 25, the artist Maren Hassinger will carry out a new commission that seeks to unravel the complexities of the history of ancestors and races. And on September 10 the artist holy bass She will make her debut in “American Woman,” an eight-hour solo dance performance depicting the underrecognized contributions of black female labor to American society.

National Portrait Gallery, established By congressional decree 60 years ago, “to obtain and display portraits of persons who have made significant contributions to the history, development, and culture of the people of the United States.” Educated as an art historian, Ms. Sajet took over the management in 2013. podcast “Portraits” he found himself “combating” the asymmetry of who was represented and who was not in the museum collection.

In 2015, the museum, “To identify” series invites artists to respond to the work in the exhibition or to introduce stories and perspectives they feel are missing in the museum. Mr. Burgess was invited to serve as the museum’s choreographer.

“My whole goal is to truly bring out the exhibits and the permanent collection for uniquely American stories that celebrate diversity, celebrate marginalized communities,” Mr. Burgess said in an interview. “And I can do that through dance.”

“El Muro/The Wall” came about when the museum asked the 54-year-old Mr. Burgess to respond to a selection of works from this year’s Outwin finalists. Growing up in a predominantly Latin American neighborhood built over a Japanese concentration camp in Santa Fe, NM, fourth-generation Korean-American Mr. Burgess said he was inspired by Rigoberto A. González’s painting “Refugees Crossing the Border Wall into South Texas.” . (2020). The work depicts a family of four hugging each other as they climb the stairs with a baby in a diaper and a woman with rosary dangling from her hand.

Mr. Burgess said,baroque feelingof your picture”: “ugliness of the situation” as opposed to the “almost sanctity of individuals trying to reach safety”.

González’s portrait was available as a source of inspiration, as the museum abandoned “our old rule that we only have portraits made of life” in order to qualify for Outwin. taIand Karagolwith the director of the competition and the curator of the exhibition. Leslie Urena. This change for the 2019 competition paved the way for contemporary artists to look back at history and think more creatively, even abstractly, about portraiture.

An example is the work of Miss Bass, which the competition judges found “extremely challenging”, as Miss Ureña portrays not “a specific individual” but “a part of our population that is not consistently accepted”. Bass’ short video “American Woman” will be one of the 42 works selected from 2,774 works until February 26.

The idea for “American Woman” came to Miss Bass as she saw it (disclosure: the author and artist have been friends since graduate school). Stacey Abrams He hailed for his success in voter turnout in the 2020 elections in Georgia. “People kept saying black women were saving America,” Ms. Bass, 50, said in a phone call. “I was struck by the idea that Black women as voters and Black women as organizers are America’s moral compass.”

The video runs 16 minutes 19 seconds, giving a “nod” to 1619, when enslaved Africans were first brought to American shores. And Ms. Bass’ extended, all-day live performance in September is intended to refer to the white-collar, eight-hour workday.

While Ms. Bass is the only triennial finalist to plan a live performance, some others have performative elements in their work. In his short video titled “Doesn’t Do” (2021), Adama Delphine Fawundu slowly untangles her hair. Lois Bielefeld“Thank You Jesus” (2020) depicts his mother’s love for combining prayer with personal training, quoting “Biblical passages I memorized while working on the blackboard.”

Between performances by Mr. Burgess and Ms. Bass, there will be a performance by 74-year-old Ms. Hassinger. As part of the 1970s avant-garde in Los Angeles, the artist sided with the collective Studio Z. Senga Nengudi and David Hammonsand later spent twenty years as a director sculpture program At Maryland Institute College of Art.

Ms. Hassinger will show the 12-minute “Birthright” (2005) video that the museum purchased last year. It documents the first time he meets his distant elderly relatives in Louisiana, and his—sometimes amusing—attempts to trace his complex ancestral tree through slavery; marriage between black, white and indigenous peoples; And, as he found out, incest.

Ms Hassinger said in a video interview from her New York studio that the performance will include her teaching a meditative hand ritual and inviting audience members to share stories about their families, while “as a way of connecting.”

Ms. Sajet said that in addition to bringing performances to help fill some of the museum’s ongoing gaps, she’s also working to hire a restorative history director. But she even then, “one thing we can’t do is go back in time,” she said.