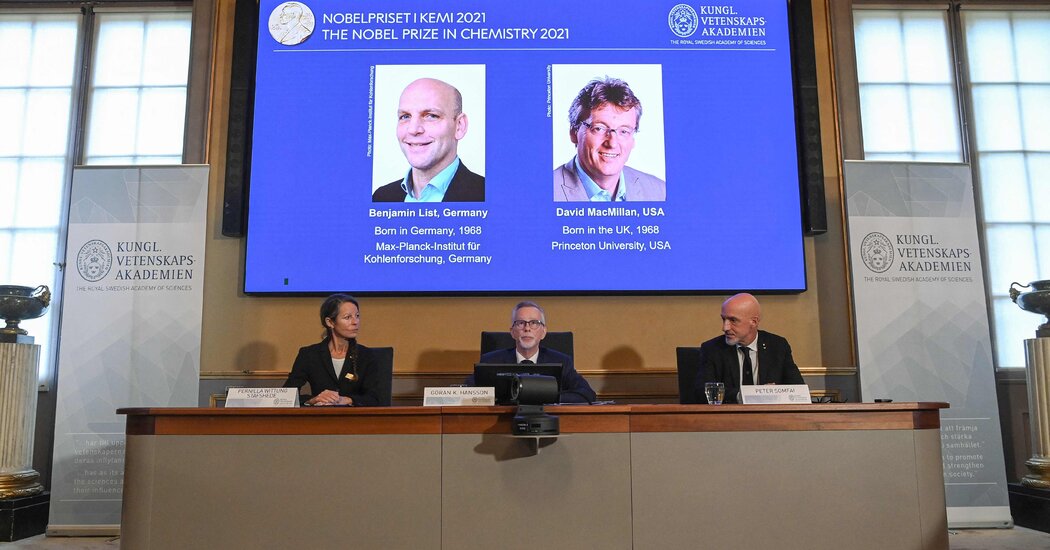 The Nobel Prize in Chemistry was awarded Wednesday to Benjamin List and David WC MacMillan for their development of a new tool for building molecules, advances in pharmaceutical research and reducing the environmental impact of chemistry.

While his work is not seen by consumers, it is an essential piece in many leading industries and is vital to research.

Chemists are among those tasked with creating molecules that can create elastic and durable materials, store energy in batteries, or prevent the progression of disease.

But this job requires catalysts, which are substances that control and speed up chemical reactions without being part of the final product.

“For example, catalysts in cars convert toxic substances in exhaust fumes into harmless molecules,” the Nobel committee said in a statement. “Our bodies also contain thousands of catalysts in the form of enzymes that cut molecules necessary for life.”

The problem was that only two types of catalysts were available: metals and enzymes.

In 2000, Dr. List and Dr. MacMillan – working independently of each other – developed a third type of catalysis.

It is called asymmetric organocatalysis and is based on small organic molecules.

“This concept of catalysis is as ingenious as it is simple, and the truth is that many people wondered why we hadn’t thought of it before,” said Johan Aqvist, chair of the Nobel Committee for Chemistry.

Who are the winners?

MacMillan is a Scottish chemist and professor at Princeton University, where he chaired the chemistry department from 2010 to 2015. He received his doctorate degree. He earned a master’s degree in inorganic chemistry from the University of California, Irvine in 1996, before accepting a postdoctoral fellowship at Harvard University. His research has focused on innovative concepts in synthetic organic chemistry.

Dr. List is a German chemist born in Frankfurt and director of the Max Planck Coal Research Institute in Mülheim an der Ruhr, Germany. He received his doctorate degree. In 1997 he was appointed from Goethe University Frankfurt to work as an assistant professor at the Scripps Research Institute in California. He is also an honorary professor at the University of Cologne in Germany.