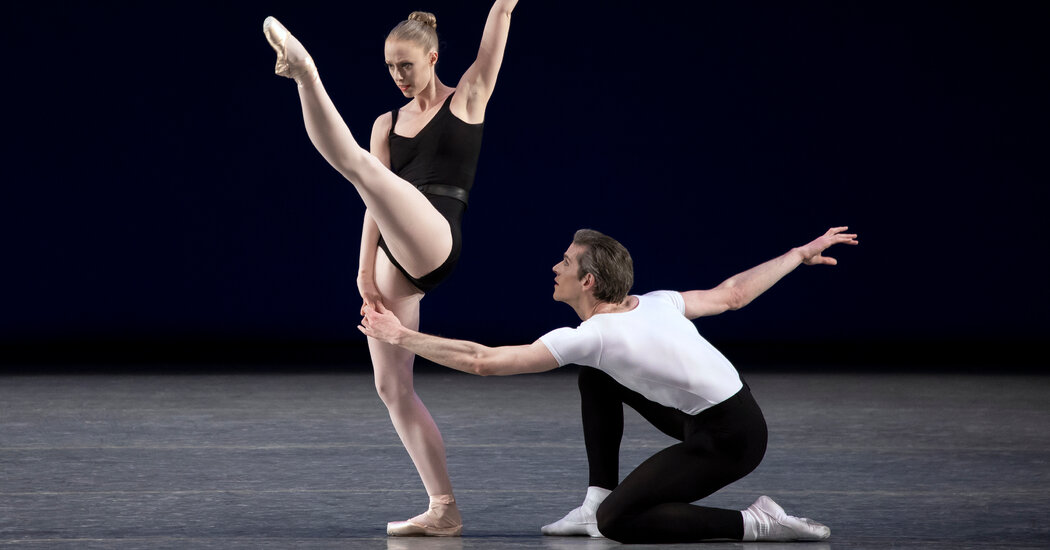 In one of my first performances of George Balanchine’s “Agon,” I stood uncomfortably on stage while my partner Teresa Reichlen danced her short solo. I had his foot pressed against his head a few times and we were about to regroup for some kind of rubber band push and pull segment. I thought, “I shouldn’t be here”.

It was the winter of 2019, and conversations about toxicity in the ballet world, especially toxic masculinity, offstage and in the press had changed my experience of ballet, which I loved. I realized that “Agon” required a machismo that I didn’t think I had and knew I didn’t want. My dance lacked faith. I didn’t know how to make sense of dance when the audience saw it exploiting every aspect of our art form.

Ballet has shaped my life and shaped my body for 27 years. I have been a principal dancer with the New York City Ballet since 2017, a dancer with the company since 2007, and have been working in ballet studios since 1995, when I was 6 years old. made sense to me. Despite its harshness, ballet gave me a freedom I couldn’t find anywhere else.

But in recent years, ballet has been cramped and it has become more difficult to find a place for myself in the works I dance. I don’t think I’m alone when I say that I’m not sure how I want to be on stage as the world of ballet grapples with issues of relevance and representation. I’m not sure how to be a ballet dancer today.

Finding authentic expression and maintaining personal and artistic integrity sounds urgent, but it may seem at odds with the art form I know and love. As I almost always play knightly roles—participating, presenting, and dancing in front of a ballerina—incompatibility is most evident when I think about how to partner. Not a partnership mechanism: I enjoy the physical challenge of supporting and hanging out with another. But it’s more the politics of two bodies dancing together.

I did the central pas deux only four times in “Agon”. Not a natural fit for me. Duet choreographed by Balanchine in 1957 Arthur Mitchell and Diana AdamsIt is built on joint action, suspense and circus-like movements. Exciting and surprising. Paid. sensual.

There is a moment when the two dancers are side by side, holding their hands above their heads and the ballerina’s foot resting on her partner’s shoulder. Balanced on the pointe, the leg connecting it to it is fully extended. Then they turn, she moves away from him, and she towards him; She approached and forced him to bend the leg behind him now, as if he were trying to get his head to touch his foot. Every time I do this part, I feel cruel, like I’m tearing my partner’s hip.

My partners are flexible and often say they’re fine, that I can step in and bring their leg a little closer to their head. But it still feels wrong because I know what it might look like – like forcing my partner into an unnatural shape.

In the early years of my career, it was very clear how I would become a partner in City Ballet, founded by Balanchine. It had its own stylistic imperatives: standing with feet together behind a partner while turning, or focusing on the weightless arc rather than the height or duration of a lift. There was an expectation that I would be assertive and reflect my strength. And most importantly, there was a need to treat my partner with respect, and sometimes even as if they were valuable. I would be a gentleman.

over Panel “Balanchine’s Guys” in 2018 Mitchell, principal of the City Ballet in the 1950s and ’60s, said of his former boss: “He was the epitome of a gentleman. And so we all learned that from Mr. B.”

And Mitchell showed it. “How are you?” she said, opening her hand as if reaching out to someone. “How are you?” He turned his hand to reach out to his imaginary partner. “Open the door. Sit down. Be a gentleman.”

Mitchell’s expressive hands and elegant demeanor could be describing a dance. There are many Balanchine pas de deux where the man does what Mitchell demonstrates: reach out, reach out questioning – practice certain etiquette or the talk of politeness and courtesy. Even “Agon”, full of antagonism and dramatic tension, requires this “gentlemanly” presentation.

In Balanchine ballets, you don’t have to superimpose emotions that aren’t there. But the duets I danced at the City Ballet weren’t meant to evoke friendship, the ballerina, and her gay best friend. When I’m with a ballerina, romance and sex are embedded in our steps and gestures.

As a younger dancer, I had the impression that when the chemistry between the two dancers suggested intimacy and certain possibilities, it gave a better performance. I saw an effortlessness in the way my heterosexual male colleagues embodied this aesthetic attitude.

But when I thought I did my best, I felt free. I didn’t feel gorgeous or masculine. I felt free. I got rid of the need to express myself as something specific. While dancing, I could just move my body and feel like myself, a queer person who loves to dance and loves to dance with a partner.

Still, there is a freedom and joy in embodying characters (and traits) that are foreign to me, and it wasn’t hard to find ways to be authentic and fulfilling in knight roles to make meaningful connections with my partners. But as my career progressed and City Ballet changed, my acceptance of the straight romance implied in the works I danced weakened. So is my understanding of what kind of partner I want to be on the ballet stage. After my company’s public accounts of how power and sex have shaped our workplace, some ballets have started to feel restrictive and outdated.

When four leading men at my company left in 2018 due to sexual harassment accusationsMy instinct was to be overly performative in my respect for the women I was dancing with. I was determined to show it to an audience convinced of the moral decay of our company, the integrity of our art form.

But the accentuated manners and devotion began to feel like a bulwark of existing problems. Always treating my partners with tenderness made me feel like they denied their power and humanity, belittled them. The choreography we conduct demands that I direct them on stage: twist, push, pull, move them in a way that is not violent but sometimes requires force and even discomfort. For example, when I try to touch my partner’s foot and head.

Return to “Agon” last fall, Teresa Reichlen and I weren’t sure how we would do in ballet. Ours was always a warm and easy affair on stage, but forged in ballets with a precision built into the choreography. With its angular shapes and tense effect, “Agon” was a challenge.

It was tempting to hold on to the gentlemanly moments when I was going to put on a show to introduce her or take her hand cautiously with just my fingertips and lead her to her place on stage. What about the meat of the dance? Push and risk? My manipulations with her body, stretching and shaping continued to feel unpleasant and unfeeling for Tess, especially after nearly two years of closure and pregnancy.

Most of our rehearsals ended in disappointment. But we talked about focusing on the game and being there instead of trying to dance the ballet as we’ve seen before. I remember hearing that Mitchell once described it as two kittens playing the pas de deux. “I like that,” Tess said, and we tried it. Our performance was probably not self-explanatory, but it felt good. We were more in tune with each other and the possibilities this dance could hold.

Part of what keeps ballet alive is the choreography, which keeps us exploring new approaches and new ways of being. Balanchine once said, “Steps are taken by one person.” “His steps are the one who dances – that’s the choreography, not your steps alone.” While looking at some aspects of a ballet’s original purpose—like when Tess and I took Mitchell’s kitten directive, for example—can open up a ballet’s possibilities, so can a focus on attention and care.

The knight’s role – the “gentleman” of ballet – has been described as a queen’s servant, but attending can mean more than just serving. Participation is caring. As dancers, we should always pay attention to the main and the music. Take care of each other. And mindful dancing doesn’t have to be based solely on romance or sexuality. The main thing is maintenance.

For my partner, I don’t dismiss the thought that Mitchell mentions when he talks about courtesy, but I’m just trying to steer clear of an etiquette based on implicit romance. Ignoring the pressure I used to feel to “play straight” both opens up the freedom to be myself on stage and helps crystallize what is important to me as a partner. In recent years, my colleagues and I have navigated the path of loss and trauma – reorienting dance to care feels good, it feels sustainable and human.

It may be easier to find space to be yourself in new dances. Less bias to navigate. I can’t dance much this season because of the tear in my knee. But I worked with choreographer Pam Tanowitz at its premiere. “The Mosaic Law.” I didn’t want to give up the opportunity to dance for someone who wanted me to be just me.

Pam did a duet for me and Sara Mearns. Sara and I often dance together, but Pam envisions something different for us. We look at each other sincerely – we are allowed to smile if we want to, although this is not a happy dance in itself – and we dance side by side, taking the same steps.

“This part is like a conversation,” Pam says for a moment in the middle of our duet. Unlike other dance conversations I’ve had in this scene, I’m not bowing down or doing any kind of courtesy to Sara.

We just exist together. Sara and I were face to face, holding hands. I touch my ankle with my foot and switch to my other foot. Then it’s Sara’s turn. This is how we go back and forth. Pam did this dance especially for us. Our movements have no special meaning, it’s me, she and we dance together.