The battle for Middle Earth rages on in the LEGO Battle of Helm’s Deep fortress set. Help Aragorn, King Théoden, Gimli, and Haldir repel the Uruk-hai army by stationing your men atop the outer fortress wall, deploying your catapult, and climbing the tower to blow The Horn of Helm Hammerhand. At 20 inches wide, this formidable set features an opening main gate, a hidden door, an exploding wall, and eight mini-figures that allow kids ages 10 and up to recreate the signature battle from The Lord of the Rings: The Two Towers. 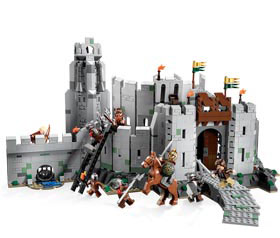 Re-enact the epic battle for Helm’s Deep with this Lord of the Rings-themed LEGO set.
View larger. 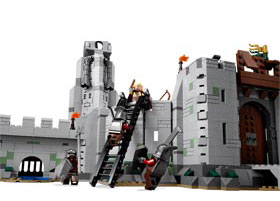 The Uruk-hai army has brought siege tools and ladders to storm the fortress walls.
View larger.

The Helm’s Deep fortress set features a 6-inch-high outer wall, a 9-inch tower with horn, and an inner throne room. When the three pieces are connected together, this set measures 20 inches wide. To faithfully recreate the famous battle, the fortress boasts an opening main gate, side-door attack function, catapult, and exploding wall. But beware, as there is also a siege ladder and bomb that the relentless Uruk-hai warriors can use to breach the wall’s defenses.

For more versatile play, the modular construction of the components allows the fortress sections to be rearranged to your liking. The included sticker sheet enhances the fortress details.

The set comes with eight mini-figures, including Aragorn and an Uruk-hai Berzerker. View larger.

Eight LEGO mini-figures are included with the Helm’s Deep set, including Aragorn, King Théoden, Gimli, Haldir, Berserker Uruk-hai, and three Uruk-hai warriors. Each detailed figure can be equipped with a wide range of included accessories, such as swords, single- and double-bladed axes, bows, shields, torches, and spears. A horse figure with a movable head and back legs takes King Théoden into battle.

Once assembled, Helm’s Deep offers several detailed play areas. Its broad size makes it an ideal play set to reenact battles. Our testers appreciated the fine attention to detail, including flags, torches, and goblets, as well as the moving set pieces, such as the gate, catapult, and collapsible wall.

What’s in the Box 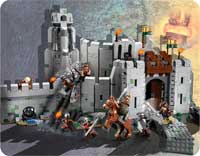 The Battle of Helm’s Deep

The walled fortress at Helm’s Deep is under attack by the mighty Uruk-hai army. The forces of men, elves, and a dwarf must do everything they can to stop them from breaching the fortress walls. Can they prevent the Berserker Uruk-hai planting the bomb and blowing up the wall? Will they stop the enemy climbing up the siege ladders? The people of Rohan have never faced such a deadly threat. Includes 8 minifigures: Aragorn, Gimli, Haldir, King Théoden, Berserker Uruk-hai and 3 Uruk-hai.