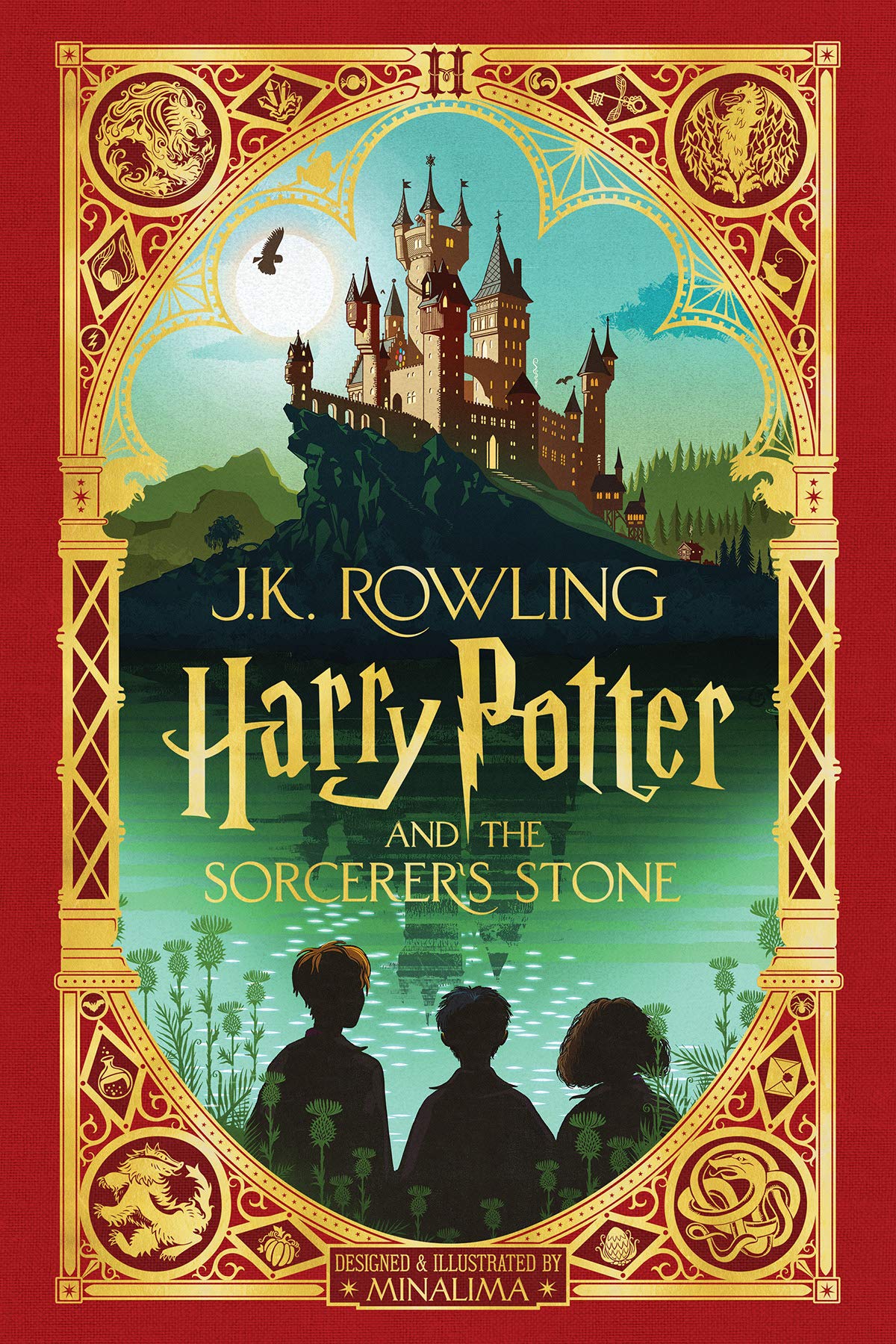 A dazzling new edition of J.K. Rowling’s Harry Potter and the Sorcerer’s Stone, fully illustrated in brilliant color and featuring exclusive interactive paper craft elements, including a fold-out Hogwarts letter and more!
In this stunning new edition of Harry Potter and the Sorcerer’s Stone, experience the story as never before. J.K. Rowling’s complete and unabridged text is accompanied by full-color illustrations on nearly every page and eight exclusive, interactive paper craft elements: Readers will open Harry’s Hogwarts letter, reveal the magical entryway to Diagon Alley, make a sumptuous feast appear in the Great Hall, and more.

Designed and illustrated by award-winning design studio MinaLima – best known for establishing the visual graphic style of the Harry Potter and Fantastic Beasts films – this edition is sure to be a keepsake for Harry Potter fans, a beautiful addition to any collector’s bookshelf, and an enchanting way to introduce the first book in this beloved series to a new generation of readers.


J.K. Rowling is best known as the author of the seven Harry Potter books, which were first published between 1997 and 2007. The enduringly popular adventures of Harry, Ron, and Hermione have sold over 500 million copies, been translated into over 80 languages, and made into eight blockbuster films, the last of which was released in 2011. Alongside the Harry Potter series, she also wrote three short companion volumes — Quidditch Through the Ages, Fantastic Beasts and Where to Find Them, and The Tales of Beedle the Bard — which were published in aid of Comic Relief and Lumos. In 2016, J.K. Rowling collaborated with playwright Jack Thorne and director John Tiffany to resume Harry’s story in a stage play, Harry Potter and the Cursed Child, which opened first in London, and is now playing on Broadway and in Melbourne, Australia. In the same year, she made her debut as a screenwriter with the film Fantastic Beasts and Where to Find Them, which was inspired by the original companion volume and features magizoologist Newt Scamander. Her second screenplay, Fantastic Beasts: The Crimes of Grindelwald, was released in cinemas in 2018. J.K. Rowling has also written a stand-alone novel for adults, The Casual Vacancy, and, under the pseudonym Robert Galbraith, is the author of the Strike crime series. She lives in Scotland with her family, and is at her happiest alone in a room, making things up.

MINALIMA DESIGN is an award-winning graphic design studio founded by Miraphora Mina and Eduardo Lima, best known for their ten-year involvement in the Harry Potter film franchise, where they established the visual graphic style of the film series. From their London studio they have continued telling stories through visuals from designing books and packaging to creating graphic props for films such as Sweeney Todd (2007), The Imitation Game (2014), and the Fantastic Beasts films. They also designed the bestselling books The Case of Beasts: Explore the Film Wizardry of Fantastic Beasts and Where to Find Them, The Archive of Magic: Explore the Film Wizardry of Fantastic Beasts: The Crimes of Grindelwald, J.K. Rowling’s screenplays for the Fantastic Beasts films, Peter Pan, The Jungle Book, Beauty and the Beast, The Little Mermaid and Other Fairy Tales, The Secret Garden, Alice’s Adventures in Wonderland, and The Adventures of Pinocchio.