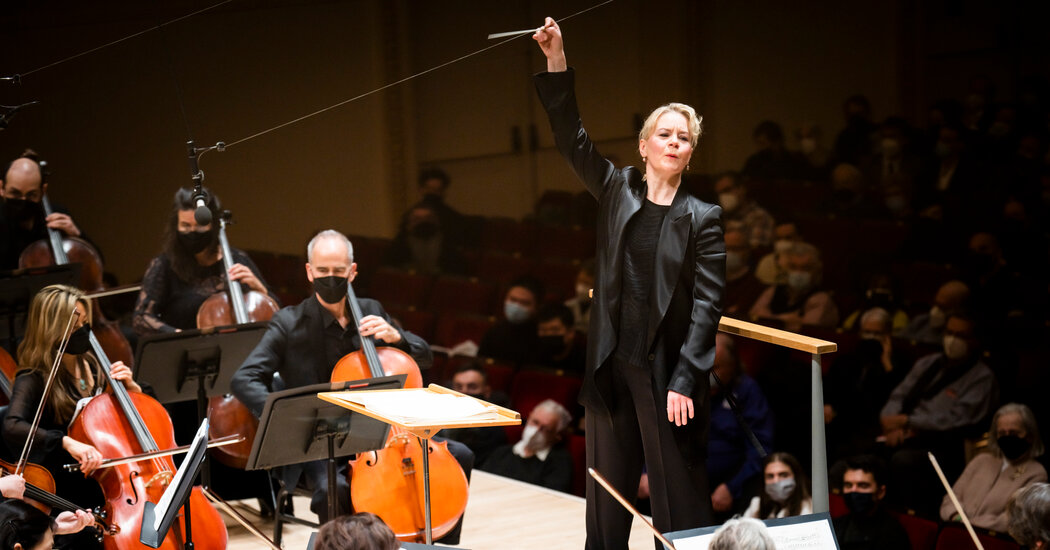 It’s audition season for the New York Philharmonic – not for a cast. With Jaap van Zweden, the orchestra’s music director, after announcing In September, when he will depart in 2024, every guest conductor now takes the podium in search of a replacement.

This Fantasy Baton play is complicated by the fact that as David Geffen Hall is being renovated, the Philharmonic Orchestra wanders off, playing an unconventional repertoire, sometimes in unusual (and perhaps inappropriate) spaces. However, the fall brought good reviews for Dalia Stasevska, Simone Young, Giancarlo Guerrero and Dima Slobodeniouk.

Although it has not received any guests so far Platform like Susanna Mälkki Thursday. It’s his fourth appearance with the Philharmonic and is the only outsider to take part in one of the orchestra’s four appointments this year, Carnegie Hall, which was his home until Lincoln Center was built in the 1960s and has not been seen since 2015. (Van Zweden) is leading three other Carnegie concerts this spring.)

Mälkki, chief conductor of the Helsinki Philharmonic Orchestra, presided over a specially crafted program for a Finnish conductor to experiment with an ensemble across the Atlantic: after a break by the Fifth of Sibelius, one of Finland’s most famous symphonic exports, two meaty, rice-like American his work.

Adolphus Hailstork’s 1984 overture “An American Port of Call” depicts Norfolk, Va. as a mix of brisk activity and sweet nighttime relaxation. Mälkki uttered sharp touches, such as some characteristic clarinet moans, and at certain moments the tidal undercurrent of the low strings even predicted Sibelius’ great “swan call” peak.

He patiently, convincingly constructed the intermittent first movement of the symphony, and there was a feeling of openness, lightness, and modesty in the whole work; neither tempos nor emotions are milked; performance was better than intense. The ensemble tones in the winds and wind instruments were clean, if not pristine or particularly atmospheric – the main bassoon of the orchestra, Judith LeClair, brought a wonderfully buttery premonition to her pivotal solo.

A former cellist before embarking on his conducting career, Mälkki wasn’t afraid to promote a little aggression on the strings: a few strong accents in the first part, and most notably, a slapstick spiccato burr on the double basses during the moving swan motif. final. But the chords at the end were sharp and sharp in some performances, where they were warm, resonant, full, even soft.

John Adams’ Saxophone Concerto is almost half an hour long with the symphony, but Thursday felt much longer. Distinguished soloist Branford Marsalis sounded soft in some lullaby-like passages, but the texture of Adams’s virtuoso humming alto-saxophone notes seemed to disappear into the dense orchestral textures—sometimes inaudible, sometimes just soft in color and bite. At times thrilling for this composer’s trademark exuberant rhythmic hum and an entertaining segment with riffs on “The Rite of Spring,” his 2013 work as a whole felt quiet and gloomy, with a resounding celesta nagging.

This is the first time I’ve heard the piece live, so I can’t be sure if these balance and energy issues are common. However, Louis Symphony Orchestra’s under David Robertson – with Timothy McAllister, who composed the concerto as soloist – creates a situation far better, more seductive and diverse than Thursday’s performance.

As for the future of the philharmonic, Gustavo Dudamel, whom the orchestra’s chief director, Deborah Borda, hired in his last job to lead the Los Angeles Philharmonic Orchestra, leads the biweekly Schumann in March. He and others to appear in the coming months such as Jakub Hrusa, Santtu-Matias Rouvali, Tugan Sokhiev, and Long Yu can be considered music director contenders.

Mälkki also deserves to be on that list. But perhaps the best indication of the space will come soon, when the orchestra announces its lineup for next season, its return to the renovated Geffen Hall. The game is open.

It was held Thursday at Carnegie Hall, Manhattan.