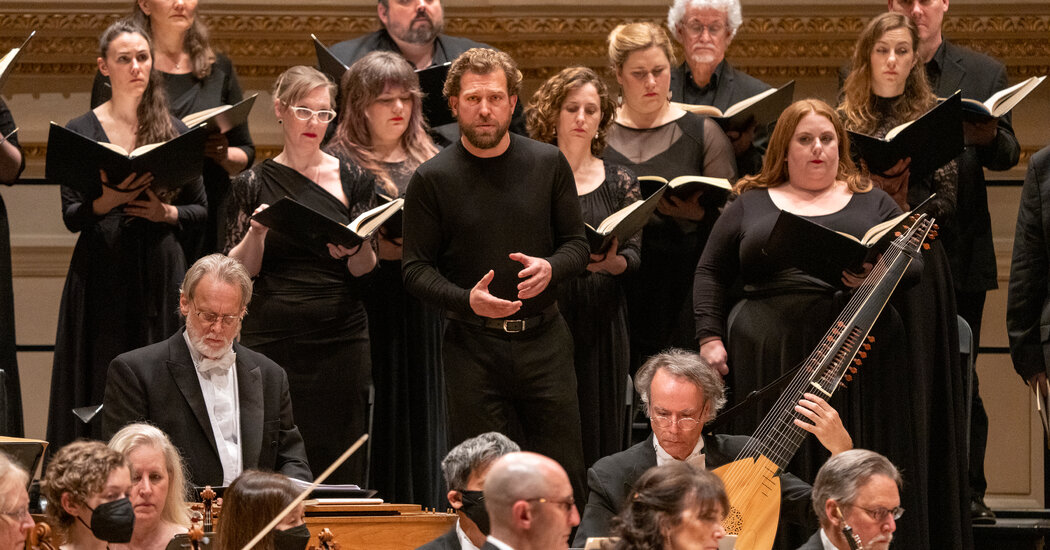 Of the two surviving Passions of Bach, “St. John” is more fiery, dramatic and disturbing. “St. Matthew” is something like his wise and thoughtful brother.

And that’s how “St. Matthew Passion” met under Bernard Labadie’s lead at Carnegie Hall on Thursday. St Luke’s Orchestra, with three choirs and half a dozen soloists. This is the battery of musical powers necessary for Bach’s Lenten masterpiece, which for over three hours chronicles the death and resurrection of Jesus with reflective edges in the form of chorales, recitatives, and da capo arias.

Bach’s note begins as if his voice is carefully raised. Here, a radio dial was akin to finding a station, while the orchestra was hesitant before settling on a flowing momentum. Beneath Labadie’s baton, the music was unwaveringly measured but balanced; it didn’t need to be exaggerated for their majestic glow to come down powerfully. From the start: The opening was calmly built towards conductor John Eliot Gardiner. called An aural analogue to the “Altar of Veronese or Tintoretto” – immersive, its elements expanding from their interaction.

st. Luke’s Orchestra played with historically informed performance qualities in the gently floating bows of the strings, their sensible embellishments, and the use of largely modern instruments, but without a wholesale commitment to it. Divided into two groups, there were also two concerto conductors: Krista Bennion Feeney, a gifted violinist for graceful expression, and Benjamin Bowman (who has the same role as the Metropolitan Opera orchestra), who is impressively agile and clear. Stephen Taylor’s humanistic oboe took on the character of a vocal soloist, and Mélisande Corriveau’s viola da gamba had a clear, authoritative expression befitting its prominent placement in the middle of the stage.

But the stars of the performance may well be the choirs: La Chapelle de Québec and the Handel and Haydn Society Choir, and St. The boys of the Thomas Choir are almost unmistakable and even memorable, all in their masterfully woven polyphony. Moments that come and go like the shocking power of “Sind Blitze, Sind Donner.”

As evangelist, tenor Julian Prégardien (who took over a role from his father, Christoph) told the story of Matthew with conviction and enthusiasm; To put it bluntly, he was the only soloist who did not sing with a note in hand. He had an expressive, soft and sympathetic upper range, but was also at times less determined and confident with a full voice – unable to keep up with the jarring tumult of “Und siehe da” in the wake of Jesus’ death.

A tenor replacing patient Andrew Staples, Joshua Blue had a consistent brilliance—like soprano soprano Carolyn Sampson, who ran with deft control and pronunciation after warming up. Young countertenor Hugh Cutting was less confident in similar passages where his intonation was unreliable compared to softer legato melodies. It was where it shone and promised the most: The cut has a penetrating power and a loudness that doesn’t come easily to a voice type. His instrument may not have been fully formed, but his “Erbarme dich” was.

Another notable episode is that in Chapter I there is a chameleon in the arias of Judas and Peter, but in the end of World War II. It was Matthew Brook who took a serious turn in the episode: first “Komm, suß Kreuz”, then “Mache dich, mein Herze, rein”. she sang soothingly with the swinging phrases of a lullaby.

This aria was even more moving about how compelling her feelings were. “St. Matthew Passion” is more meditation than melodrama, and this reading carried this belief to the last – its dissonance barely contained, the slightest tension dissolved by the grace of the peace it was supposed to project.

It was staged at Carnegie Hall, Manhattan.