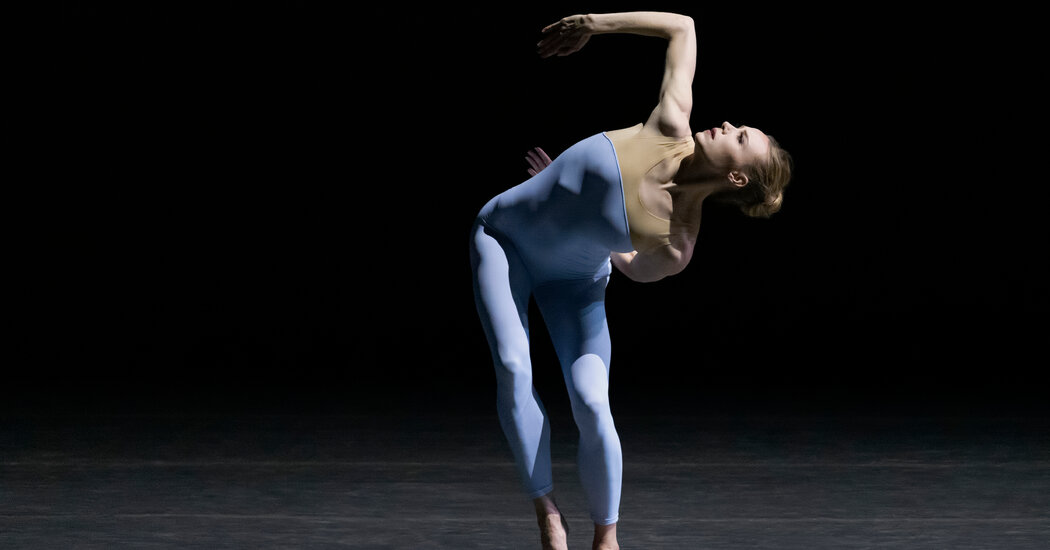 Sometimes, the choreography looks like a patchwork—yes, a mosaic—of allusions to ballet rituals and codes. At first, a group randomly clusters in a far corner of the stage (Tanowitz likes to use fringes), as if preparing for classroom exercises on the entire floor. For Miller, a solo oscillates in silence between practice and performance. In a key duet, Sara Mearns and Russell Janzen introduce tainted, softened versions of the story-ballet mime. (Here Tanowitz reuses material from his second City Ballet work, short film played by Janzen.)

Most of the action plays with those relaxed quality and tired images. Mearns, standing behind Janzen as he points into the distance like a prince, rests his head on her arm as if giving up the mid-pas de deux. In an episode with several couples, the women are heavy and fall onto the wooden floor. At the other extreme, more traditional displays of virtuosity sound like alarms, just as Preston Chamblee whips her in a series of fouetté turns, or as a stunning new corps member, Ruby Lister, alone commands the stage with alert, bouncing leaps.

In some ways, the “Law of Mosaics” seems haphazard, structurally confused. Other than that, its piecemeal nature is read more deliberately as a stark challenge to the expected order, not only for the audience, but also for Tanowitz and the dancers. The essence of the dance, curiously, seems to be its end: a stark, shadowy solo for barefoot Sara Mearns. Recently, Mearns has been involved in collaborations outside of City Ballet. sorry (or so it says). As she balances and bourrée, her limbs sway and protrude against the violent jolts of the music, a real vulnerability to surface. In retrospect, he seems to be the main character in this mystery.