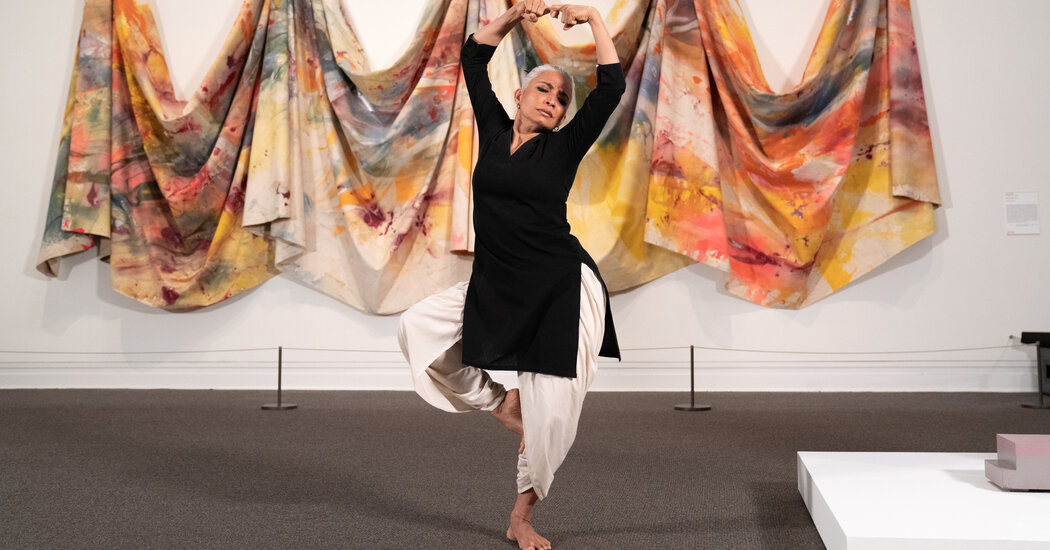 One of the most fascinating dance events of recent years appearance By the Nrityagram Dance Troupe at the Metropolitan Museum of Art in 2015. The splendor of the Dendur Temple found its way into the moving statue of dancers Bijayi Satpathy and Surupa Sen. Now Satpathy is back, this time on his own. MetLiveArts artist resides, with performances in galleries around the museum last weekend and the next. Ravishment is back.

Satpathy in the drama called “Sima” or “The Thresholds” solo discoveries The classical Odissi style is pushing its limits in response to the art around it, and he does this in collaboration with composer Bindhumalini Narayanaswamy. On Saturdays and Sundays, Satpathy presented two short pieces (less than 15 minutes each) in two galleries, each one incredible and incredibly different from the other.

“Taru”, meaning “Tree” in Sanskrit, was featured in an Islamic gallery with carpets hanging under an ornate Spanish ceiling. Narayanaswamy’s recorded music was captured in the Iberian theme and translated the Hindustani form tarana to classical guitar. Satpathy seemed mostly inspired by Islamic pattern making, fractal and tree-like things.

One of the glories of the Odissi style as practiced by Nrityagram is that its curvy poses, deep folds and curves are sculptural yet non-static. It’s a perfect picture at any moment, but just when you think the shape is done, it gets longer, more twisted, deeper. Towards the beginning of “Taru” Satpathy’s eyes focused attention on his hands overlapping each other in an ascending pattern, each opening like a blooming flower, as if pulling one of his legs to the opposite knee. Balanced pose that intensifies while leaning back.

Satpathy made it a principle of choreographic composition. He repeated a step in a circle, then added circles to his torso or head, then twisted these circles in a circle into a spiral. The result was a sense of flow, a long-form sense of progress in repeated digits.

This was especially true as the music became rhythmic and tapped the floor with bare feet as its loops were churned, marking the instrument by adding jumps to the ends of sentences that were breath rather than exclamation points. He played circles against the diagonals and backed into the nearby rings to a back corner.

“Antaranga” – located in a modern and contemporary gallery in front. Cover painting “Carousel State” by Sam Gilliam – Strikingly modern, Satpathy walked in like other museum visitors, dressed in contemporary clothing and without the traditional bells on his ankles. Yet it was also ancient, as Narayanaswamy is an ancient Greek (by Niti Bagchi) recitation of Sappho’s Part 31 in mixing percussion and groaning note.

There was deepening here too, as he placed his arms in the form of a clasped ring on his fingers and stretched them behind his head – and then swung on his knees, activating this pose. (As she turned to face her, her arms were covering her face, love overshadowed herself.) But these advances were more dramatic, following a woman’s feelings as she contemplates love, embracing her in her hands, then battling her, throwing her hand forward with a stretch. It balances and extends like a bow or arrow, retracts swiftly like a matador.

Satpathy finished by looking at the “Carousel State,” as if the dance were his character’s reaction to the art, the memories and emotions it evoked in his mind. “Antaranga” and “Taru” were the reactions of this outstanding dancer and choreographer to the stimuli of the Met, his art developed by the museum and vice versa.

So it’s a pity that both performances were arranged for cameras documenting the dance rather than museum visitors stuck around the cameras to experience the dance live. In September Satpathy will be performing at the museum’s theatre, but if you choose to go on a Saturday, arrive early for a chance at a good place.

Saturday at the Metropolitan Museum of Art; metmuseum.org.