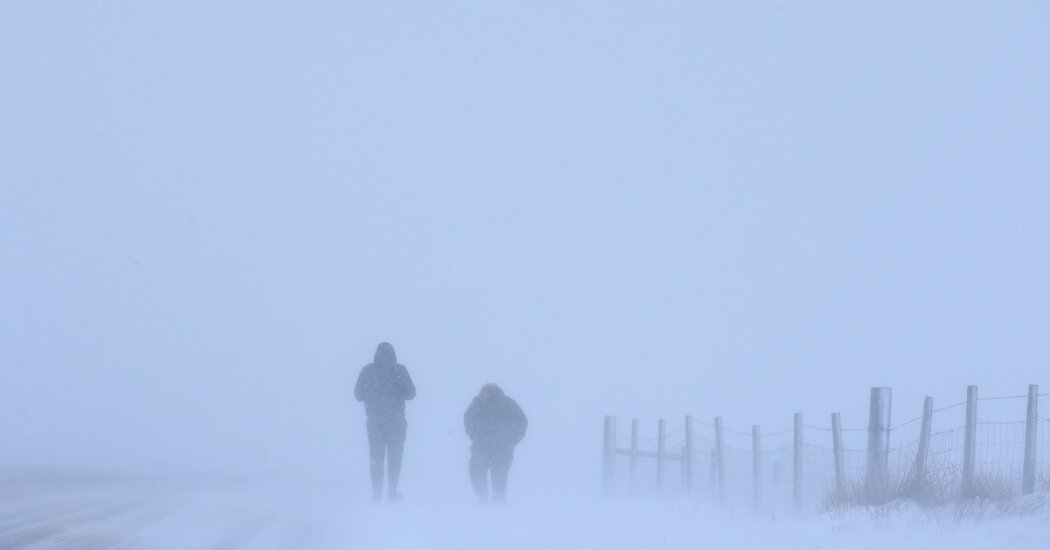 Years ago my husband was caught in a tornado. He stopped his truck on the highway just outside Winner, SD and crawled into the ditch. “I’ve always heard that hurricanes sound like freight trains,” he told me, “but at that moment, I swore I heard a freight train. And I thought, Where is the train coming from? Then of course I realized what it was.” Hail and debris fell like a fist, the sky turned greenish-black. The power of the storm was endless against him. He would die or not die. He said he felt at peace.

This fall, two novels—one old, one new—explore this special kind of power, the unpredictable ways storms can shape and control us. Jon McGregor’s “Lean Fall Stand” begins in present-day Antarctica, where three men set out to map a remote peninsula. Two researchers; The eldest, Doc, is their guide, a decades-old veteran on the ice tasked with keeping the young men safe and clearing up the remnants of their previous missions. For a book that begins mid-adventure, the pace is almost slow; What can’t be said about Antarctica, one of the young men, was “most of the time it was totally boring”. But the blizzard that caught them is sudden, confusing. We get radio static blasts whipping up snow, a look at a man on an ice floe. When the weather cleared, a researcher died and Doc was flown to Santiago, Chile after suffering a stroke.

The rest of the book – for the most part – deals with Doc’s grueling journey through rehab, speech therapy, and support groups. The doctor has difficulty communicating; his wife Anna struggles with babysitting duties that require her to put her own scientific career on hold. McGregor points to observations of the infantilization of sick people, the division of labor in heterosexual marriages, and the failures of social support systems: “Don’t get in trouble,” visitors to Anna and Doc’s home have previously said. He was telling Anna “how many candies they bought”. Here, insurmountable power becomes the limit of Doc’s own body as he tries to tell the story of the blizzard.

George R. Stewart’s “The Storm,” which has sold more than one million copies since it was first published in 1941, was recently reprinted in a new edition from New York Review Books Classics. The book traces the journey of a fictional storm from its first movements over the Pacific, to its explosive peak, and its gradual extinction after crossing a third of the world. Storm creates an alien hero independent of the standard plot; The storm, even at its highest level, is a product of changing air currents, not human preferences.

Stewart, a novelist who teaches English literature at the University of California, Berkeley, presents meteorological details with obsessive care, albeit with wry humor. “The ship would be of interest to sailors,” noted a new junior meteorologist ($2,000 per year) noting a spot on his chart, “but it seemed totally boring and mechanical to him”—that’s what after Stewart guided us through isobars, barometric pressure, physics equations, and meridians. pages.

Where people appear, it’s almost accidental. The young meteorologist – JM, as will be mentioned later – names the storms after girls he knows, and when he is no longer acquainted, names the girls whose names end in “ia”, bringing to mind the actresses or heroines of the books. JM, who noticed the first stirrings of our heroine and named her Maria. (After the “Storm” aired, the National Weather Service began naming storms.) JM works under an aging weather chief who boasted about predicting the weather for President Grant’s inauguration, an event he can’t actually remember. The chief is concerned about the next generation of meteorologists who elevate science and place rules above instinct and art; They guess without sticking their heads out the window. “Oh my God,” said a friend of mine, who is a meteorologist, when he read the chief’s laments. “This is literally meteorology Twitter today.”

Stewart does not miss the opportunity to philosophize. From Genesis to Revelation, the Bible reflects water as symbol and theme, and the human tendency to relate to the world when we are indeed air creatures – just as “a crab moves on the bottom of the ocean, but is made of water.” He had meteorological concepts such as the Polar Front theory (I. explain the formation of storms) was made in peaceful times, he points out that our understanding of weather may have been shaped by metaphors of love and marriage rather than wars and fronts.

If this book had been written in peaceful times – it’s hard to imagine it would exist. The storms that Stewart considered from his home toward San Francisco Bay weren’t just meteorological. If “The Storm” seems dark, its introduction says “remember that the text was largely written during those dreary and dreadful months of Dunkirk and the fall of France.” But by looking at society from the height of a storm, he frames all human and animal lives—serious and ignorant, shaped by forces they forget to take into account—that they are on the same side as meaning and survival efforts. A fur trader spits on the ground. An owl gets electrocuted by a power line. A boar named Blue Boy, named after a wild boar in a Will Rogers movie, drowns in a sewer and his body closes a culvert that delays a train. A telephone worker transmits the sound of the Thai minister’s cough.

“The Storm” is a product of its time, both disturbing and benign. Stewart sometimes resorts to ethnic slurs and clichés, which is particularly troubling for a book whose central – albeit subtle – moral one should all get along with. The book has been called the first eco-novel, and it falls victim to a common lack of genre, at least among white American writers: an author feels neutral, can experience the pleasant illusion of being outside of humanity, and thus reflects his cultural life. prejudices to nature itself.

“The Storm” is also a testament to the attention spans of the past; It’s hard to imagine a novel with more science than plot selling a million copies today. For the first few chapters, I felt like I was reading a rather unusual, albeit generally good, textbook. But by the middle of the book, the people in their little lives seemed to be lovers, and for each, let’s say, I was rooting like a hamster digging a lost food pellet into sawdust. “You know so little!” I wanted to tell them. “But you’re so cute! I know you can probably figure it out.”

What would “The Storm” look like if it were written now? What metaphor is needed to make the argument that all people – even all Americans – are on the same side? Who does this fantasy comfort and who does it hurt? Meteorology doesn’t do that. In the age of climate change, the idea that the only thing humans can’t influence is the weather is bizarre, and the idea that we can instinctively unite against an existential threat seems naïve. If there’s hope here, it’s us. to do matter – as small and short-lived as we are, it floats through the air like clouds. The world turns after all. The storm won’t care, but we will, and maybe that’s enough.