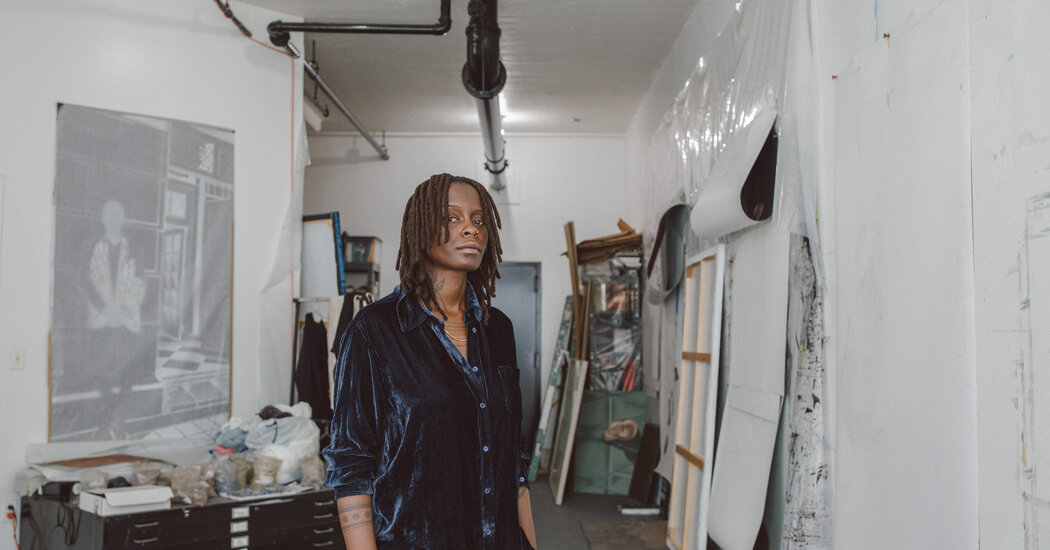 Interviews with the Nigerian-American artist Toyin Ojih Odutola he tends to reflect the curious mood he evokes in his drawings with ballpoint pen, pencil and charcoal. They are adventurous, textured with sudden tangents, and full of humor. You can start by gushing about Michaela Coel’s 2020 HBO miniseries, “I Can Destroy You” just to end by thinking about the history of pre-colonial Nigeria. Along the way, you can think of Nina Simone’s performance in 1969 “Being Young, Gifted, and Black“Caught in Questlove’s 2021 documentary”The Summer of the Soul”; Laughing about the centuries-old beef among Nigerians and Ghanaians; lament tokenism in the creative industries; and at last they rejoice in the power of Octavia Butler’s mind.

At least that was the conversation we had over coffee in a small white office in the back. Jack Shainman Gallery Went to New York last month. “There was so much empathy in his words,” Ojih Odutola said of Butler’s stories, fingering the sleeves of his sweatshirt. “It was a place to go, explore safely and test ideas.” Indeed, reading Butler, whose science fiction novels are filled with deep play and imagination despite their sometimes dark themes, changed the life of Ojih Odutola and inspired his latest exhibition, “Toyin Ojih Odutola: A Compensatory Theory” opens this week at the Hirshhorn Museum in Washington DC.

Commissioned by Barbican in London and screened there from August 2020 until early this year, the exhibition takes the artist’s experiments with form and narrative to new levels. Through 40 large-scale monochrome drawings and an electrifying soundscape by Ghanaian British artist Peter Adjaye, he chronicles a forbidden relationship in a fictional ancient Nigerian civilization ruled by Eshu, a female warrior class that produces male workers called Koba. The outlines of this mythology are from Ojih Odutola’s Butler’s “Patternmaster” (1976), an adult novel set at age 19 in a deeply bifurcated society, but it wasn’t until 2019 that the artist decided to develop his own story. Write yourself down in “a Nigerian history that feels safe, exploratory and weird”.

Ojih Odutola, 36, was born in Ife, Nigeria. He moved to the United States with his mother and brother when he was 5 years old. The family lived in the Bay Area of ​​California, where his father resided, until 1994, then moved to Huntsville, Ala. Drawing that he started at a young age helped Ojih Odutola process these moves and realize his experiences growing up in America. Sunlight. “There is an everyday quality that I love,” he said of the medium. “Even if there are errors in the work, for me it’s indicative of that 9-year-old boy trying to copy what he sees in the world and interpret it onto another surface.”

Despite his early love of image creation, Ojih Odutola did not see himself as an artist until his first solo exhibition, “(Maps)It was exhibited at Shainman in 2011. The show opened before her final year at the California College of Arts, where she studied painting and drawing. (Before graduating, Ojih Odutola earned his bachelor’s degree from the University of Alabama in Huntsville, where he majored in studio art and communications.) Sighting featured hypnotic ink portraits depicting black people, many of them portrayed as mid-action versus plain white. stripped of backgrounds and any additional contextual clues: Who owns the hand that goes down from the top of “Entering the Ring Finger” (2011)? And what is the figure who looks so intently in the movie “You Are So Sure of Yourself, You Are There” (2011)? The exhibition marked the emergence of a distinctive style, defined by soothing pencil strokes and strong shading that create a ripple effect as if the drawings themselves breathe life.

Ojih Odutola developed this technique and his interest in storytelling was “Toyin Ojih Odutola: Determined to Wander”, 2017 solo exhibition at the Whitney Museum of American Art. Colors—an array of unsaturated pinks, sky blues, forest greens, and dirt browns—were into images. And 18 nearly life-size portraits of charcoal, pastel, and pencil wove an expansive story with a central focus. Two young Nigerian aristocrats lie in bed, tour vineyards and write updates on their travels. The artist himself took on a new role: “The works presented here are entrusted to the current Marquess of UmuEze Amara, TMH Jideofor Emeka and her husband Lord Temitope Omodele of the House of Obafemi,” wrote Ojih Odutola, assuming the voice, in a letter included in the exhibition, of the couple’s mansion. assistant secretary. Losing himself completely in this fully realized invented universe, he moved from simply translating experiences to constructing them.

The enthusiastic reception of Ojih Odutola’s work both affirmed his talent and reflected the appetite for the moment. In recent years, gallerists and viewers have become increasingly eager to see their paintings in art institutions, from which Blacks have long been excluded. But Ojih Odutola is not concerned with traditionally placing Black faces in white spaces or projecting what they think they know about Black people onto white audiences. Instead, he seeks to question the rationale behind what we believe as Black people and delve into the sense of uncertainty created by imagining alternative existences. He asks us to think beyond representation and grapple with the effects of power, to think about who is going to tell stories about the world.

Ojih Odutola took these questions and himself further with “A Compensatory Theory.” He reverted to a monochrome palette, but instead of using a white background, he drew with white charcoal and pastels on black canvas. He noted that in both iterations of the show, things hang unevenly and the walls should be painted in a monochromatic tone to create a choppy effect. Although she had never collaborated with any other artist before, she approached Adjaye in creating a spectral soundscape that would reinforce the independent world of the installation. “He’s a really intuitive composer and was able to translate beats that paintings couldn’t,” he said. “He was able to transform this new, beautiful language of sound into this visual language that is at the same time otherworldly and strange.”

Ojih Odutola’s hope is for visitors to surrender themselves and their imaginations completely to the exhibit, thereby having a kind of sacred experience. Towards the end of our conversation, just before we answer the following questions, referring to a note he included at the end of the show (this time with the voice of a fictional Nigerian archaeologist). The wall text reads, “We appreciate and welcome anyone who is willing to join us in this fascinating exploration, even if they don’t know the exact meaning.” While this phrase is a kind of coda for “A Theory of Equilibrium,” it is also a feeling that is true in all its work, an invitation to surrender to fantasy and join it in your imagination.

how is your day going?

No day is ever the same. There’s more to the nature of being an artist now than just doing a job. I wish I had a routine, but that’s not possible.

how much do you sleep

Six hours a night, give or take. I find nighttime activity in the studio very productive so for me sleep depends on it. The best job I’ve ever done on any show was the night I was totally on the long haul. Like three or four in the morning, things go bad and it’s magical.

How many hours do you think you do creative work in a day?

This cannot be calculated. It never stops in the studio; follows you everywhere.

What was the first piece of art you made?

What was the worst studio you’ve ever owned?

I don’t think I’ve ever had a bad studio. Every studio I’ve been to, I’m grateful to have.

When you start a new piece, where do you start?

Each is different, but there is usually an idea in the form of a question. This question is just impulsive because then there is the material. I could have asked this question but then the pastel might be like, “No, that’s not what we’re doing.” It becomes a puzzle and each piece is an opportunity to test and solve something.

How do you know when you’re done?

When someone takes my job.

How many assistants do you have?

No, but I wish I did; my life would be so much easier.

Have you helped other artists before? If so, who?

What music do you play while making art?

This is a good question. Depends on the mood but mostly jazz. I’ve been listening to a lot of Sonny Rollins lately.

Are you clicking any shows right now?

What is the weirdest object in your studio?

A pair of Gucci loafers I recently bought from Italy. They were very expensive and were the worst shoes of all time. Whenever I walked, all these Italians were looking at me with pity, “What are you doing?” They are now my studio shoes, a reminder that there is luxury in you and that this need not be justified by these tiny little objects.

How often do you talk to other artists?

Anytime. This is the joy of my life. I love putting ideas together.

What do you do when you procrastinate?

Oh my God. I watch movies, I read. I love to walk, it was a big thing for my mental health.

What was the last thing that made you cry?

I think about my family’s reaction to my show.

What do you usually wear to work?

An apron and whatever I’m feeling that day is clean.

If you have windows, what do they face?

Another building and spooky. They are currently doing construction and that scares me because it means there are people moving out soon so I will need to buy curtains.

What do you buy in bulk most often?

What are you reading?

“Tell Them I Said No” (2016), by Martin Herbert, “open water” (2021), Caleb Azumah Nelson and “Blackspace: On the Poetics of an Afrofuture(2020) by Anaïs Duplan. “Tell Them I Said No” is about artists. David Hammonsturning his back on the art world. “Open Water” is just a good story: It’s great to have a good plot that reminds you of parts you may have forgotten. And “Blackspace” taught me how to tap into the imagination of not just Black bodies, but Black spirituality. We are forced to think too much about our bodies but not too much about our souls.

This interview has been edited and shortened.