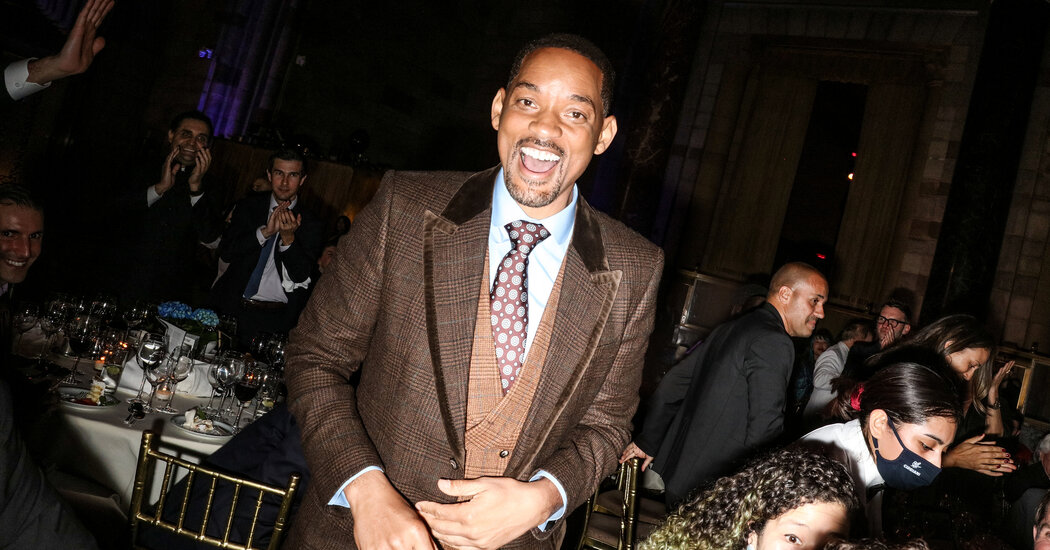 The National Board of Review award premiere is not televised. This fact was proclaimed on stage by host Craig Melvin, and giddy repeated by several guests.

The awards premiere is among the last of this year’s Oscars, and the night without television is famous for its candid, rather long, and profane speeches. This year’s premiere on Tuesday night at Cipriani 42nd Street did not disappoint.

“We’re just having a good time roaring,” said Annie Schulhof, chairman of the board.

The invitees included film directors, producers and many famous stars such as Julianne Moore, and most of the crowd took advantage of the free Bellinis offered by a phalanx of white-jacketed presenters. There were also three open bars with the free flowing wine poured during the steak and shrimp salad dinner.

Conversations with the promise of back slaps and swearing – mercifully – tended to be short.

Winning the best actor award for his performance in “King Richard,” Will Smith took the stage at 8:15 pm and pointed to Bradley Cooper at a nearby table. “I can’t even concentrate, she’s so beautiful,” she said.

Alana Haim also applauded Mr. Cooper when he accepted the award for best debut performance in “Licorice Pizza,” which he shared with Cooper Hoffman. “It’s very meaningful that Bradley Cooper gave us this award because you were the first real actor we’ve acted with,” said Ms. Haim, wearing a sleeveless, Kelly green dress by Marni. He also referred to the cast and crew as “family.”

Chef and television personality Marcus Samuelsson took the “family” trope a step further and referred to Spike Lee as “Uncle Spike” for inspiring him to become a chef. Mr. Lee donned a hat that looked like a chef’s hat while promoting Questlove, who won the best documentary award for “Summer of Soul.”

Dressed in a white Naeem Khan gown embellished with beaded flowers, Ilda Mason received the best actress award for her “West Side Story” co-star Rachel Zegler (she was on location shooting for “Snow White”). Ms. Mason’s voice cracked with emotion as she read the thank you message on her friend’s phone.

As the ceremony ended around 9:30 am, Chris Rock presented Paul Thomas Anderson with the best director award for the big winner of the night, “Licorice Pizza”. He complained of the National Board of Review “because they’re so cheap and they don’t have a router.” “I come here for Paul Thomas Anderson, who has never sent me to anything,” he said, using stronger language. “Not even for washing his car,” he added.