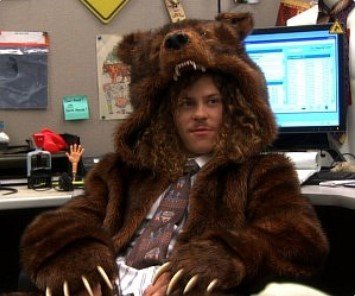 Comedy Central’s Workaholics TV series has become quite popular after just a few seasons, and
it’s no secret that Blake Anderson’s Bear Coat has been a hot commodity among fans from the time
it debuted.

nog We’ve seen individuals and companies try to recreate the awesome Bear Coat, but was
never overly impressed with anything on the market. This was before we found this.

This Workaholics Bear Coat is designed to replicate the one worn by Blake down to the
smallest detail, meaning there are no buttons or zippers. The coat is exceptionally warm,
making it a perfect gift for the coming winter season. You’re picking up yours from 80sTees now.

You’ll look ‘straight grizzly fur for sure’ when you roll around in this Workaholics Bear Coat. You’ll
feel just like Blake, especially if you put a bottle of ipecac in your pocket. It’s like a free pass
from work.

The jacket is exceptionally warm, and it’s designed just like Blake’s, so it doesn’t have buttons or
zippers. We specially have the claws movable, where you actually stick your finger in the claw.

Where can I get that bear coat

is a question that has come up more often than waymond has not spoken. The answer I wanted to give
the most is “check Marc Summers’ house”, but for liability reasons I kept that kind of silence.
I don’t have to worry about sending lunatics to Mr. Summers’ estate anymore. The coolest costume
closet addition you’re making this year may be yours now, because just in time for you to blow that
Christmas money from Grandma, evorazon.com offers your own, official, BEAR COAT.
You buy it HERE.
Where are you wearing it after that? That’s up to you. But we recommend not doing this in a dense forest
area during the hunting season. Because dis coat looks real.

It’s straight grizzly.
And now…
You too.