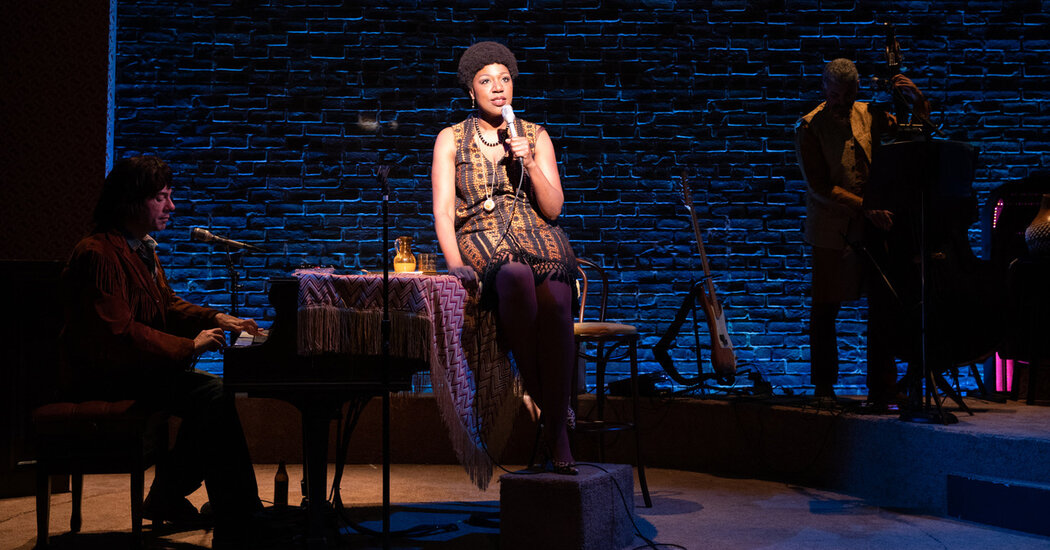 Musicals are often based on familiar patterns—a patter song here, a “I Want” number there—and biographical musicals can be the most predictable of all. The songs are mixed with enough backstory to make the audience feel like they didn’t pay a lot of money to watch a cover act, and there’s traditionally a juicy, award-winning tour de force for the lead actor.

And so it went successfully, in case of such hits “The Boy of Oz” (Hugh Jackman as Peter Allen), “Beautiful” (Jessie Mueller as Carole King) and “Tina” (Adrienne Warren as Tina Turner).

Laiona Michelle’s tribute to Nina Simone for “Little Girl Blue”, which recently opened at New World Stages, while not always successfully executed, fits the overall format with some interesting, idiosyncratic touches. The hallmark of the show is its attempt to avoid linear storytelling and its refusal to provide the expected touchstones. This approach suits Simone, who rarely follows predetermined paths, but the resulting impressionistic portrait benefits from the viewer’s familiarity with the key metrics of her subject’s art, personality, and life.

Each of the evening’s two acts takes place in a concert that marks a pivotal moment in Simone’s career: the first, in April 1968, by Reverend Dr. He was in Westbury, NY a few days after the murder of Martin Luther King Jr.; the latter was at the Montreux Jazz Festival in Switzerland in July 1976. Backed by a fast-paced trio led by music director and pianist Mark Fifer, Michelle portrays Simone with an ardent dedication to the musician’s mood swings, spiciness, and arch styles. She spoofs some jokes and set lists, but not that much. And since the rights to “Mississippi Goddam” could not be secured for this show, she and Fifer wrote the original “Angry Black Woman” as a kind of conceptual homage.

Often these historic concerts serve as springboards for snapshots of an often-suffering, always-seeking artist, just as songs are springboards in Simone’s free-motion live action. (It’s no coincidence that Justin Vivian Bond and Taylor Mac are both excellent Simone interpreters, whose performances can go from erratic to perfect and back again in a split second.)

If there is a thread, it is Simone’s anger at the expectations placed upon her as a black female artist. For example, he didn’t like being labeled jazz. “It’s a term coined by whites to describe Black people,” she says on the show. “H. I. Classic.” But his genius was based on using one to feed the other, leading to some inspiring musical juxtapositions from Michelle (who wrote the script with additional material from director Devanand Janki).

At one point, Simone’s piano teacher, Muriel Mazzanovich, alias Miss Mazzy, uses her young student’s real name to say: “Eunice Kathleen Waymon, I want you to meet Johann Sebastian Bach.” Michelle’s Simone jumps right into “Ooh-oo boy, things will get easier” from Five Stairsteps’ “Ooh Child,” and that shot may be the most promising moment in the show.

“Little Girl Blue” loses focus during the Montreux concert as the push and pull between Simone’s talent and her demons, activism, and the world around her becomes harder to spot – it feels like Michelle has somehow been tricked by its subject matter. Still, she’s neither the first nor the last: The title of Liz Garbus’ Oscar-nominated documentary is “What Happened, Miss Simone?”